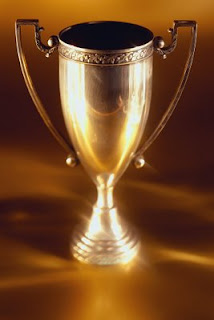 Well, the competition is over and what an amazing experience it was. Sensei's organisation of the event was impeccable as usual and the whole afternoon ran like clock work.
He worked incredibly hard as referee for every single sparring round - and there were dozens of them, but his concentration and fairness didn't waver once. He had help with the refereeing from some of his black belts and other senior students, his partner operated the stop clock and various people helped out keeping scores and recording the results -so it was a real club effort.
We warmed up with a team sparring event so that everyone got the chance to have a round of sparring before the individual event. This took about an hour and allowed us to loosen up and shake of some pre-competition nerves. Then we started the individual event with the children going first.
So how did I do? Well, there were three ladies in my category, two 1st kyus and me (still 4th kyu) so I didn't really expect to win. I came third out of the three of us but I think I put up a pretty good fight. I know both my opponents find me a little scary to spar with sometimes because I generally have a very attacking style, but they really shouldn't worry because their greater experience and more skillful techniques generally prevail.
I had a long think about where I went wrong when I got home. My big disadvantage is a lack of height and I haven't yet worked out how to deal with that. Both of my opponents were much taller than me, one about 3 inches the other 5 or 6 inches. This also means they have a longer reach than me and makes my head a nice target for hitting. Being smaller I tend to go for chudan punches but while I'm throwing my punch they are aiming for my head with the counter punch and their longer arms tend to make contact with my head before mine makes contact with their abdomen! The referee nearly always (correctly) awarded the point to them.
I think my aggressive style is working against me. I seem to be able to drive my opponents back with no problem but I seem unable to capitalise on this advantage. I'm too slow to spot openings but seem to be leaving myself undefended because they still manage to get a jodan punch on me. I think I must be getting too close to them as I drive them back.
It wasn't all bad - I did score some points but not as many as I gave away. One opponent landed an amazing kick on my chin, very controlled and accurate and deservedly got her 3 points. The other opponent, who has the benefit of youth ( she's only 17) , was just to quick for me, she's very graceful and light on her feet!
So the event was a great learning experience for me and hopefully I will improve with training.
I think I need to develop some more defensive tactics and perhaps be a little more patient and speed up my reaction times and improve my range of techniques and......and a million other things no doubt! This sparring thing is really difficult!
The only negative aspect of the competition (and it was quite a big negative) was that I injured one of my opponents. I attempted a jodan zuki but judged the distance wrongly and landed the punch too hard, hitting her in the orbit. She had to stop and bend down until the pain subsided and it did leave her with a small cut below the brow. I'm just hoping it doesn't leave her with a black eye. I felt really bad about it.
I'll get the chance to do some more sparring next week when I grade for 3rd kyu so hopefully I'll have improved by then! If you have any tips I'm all ears......

This work is licensed under a Creative Commons Attribution-Noncommercial-Share Alike 2.0 UK: England & Wales License.
Posted by Sue C at 19:13

I know it's an old cliché but It really is the taking part that counts. Many people do not realise how much courage it takes just to take part in a competition.

Good luck for your 3rd KYU

Thanks Rig. I actually enjoyed the whole event even though I lost - it hasn't put me off trying again.