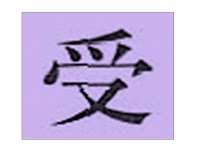 I thought I’d sorted out the roles of uke and tori a while ago then I decided to find out a bit more about them and Wham! Something that was straight forward is no longer straight forward.

The word uke means to receive. The kanji character (above) for uke depicts two hands, one reaching down, the other stretching up, and between them is placed the character for "boat." This "conveyance of goods from one person to another" became, over the centuries, the kanji to indicate the act of "receiving."

It appears that the word ‘uke’ is used differently in different martial arts. The most common understanding of the roles of uke and tori is found in jujitsu where uke provides the initial attack and then ‘receives’ the self defence technique from tori. The same is true for aikido and judo.

In karate the situation is different. The terms uke and tori are not generally used to describe the two opponents in a combat situation. They are not used in my club and I have not found reference to them in any karate text book. In Ian Abernethy’s book Bunkai Jutsu he just refers to the ‘opponent’ and in Lawrence Kane and Kris Wilder’s book The Way of Kata, they refer to the ‘defender’ and the ‘attacker’.

It took me a little while to get my head around why it should be the other way around in karate compared to other martial arts but I’ll try and explain.

In karate the word uke is often used to mean block, as in age uke (upward rising block), uchi uke (across block) and soto uke (inward block). However there is much controversy in karate about the role of blocks. Many people say that blocks in karate katas are not intended to be blocks but a way of receiving an attack in order to seize the initiative and take control of the situation. Remember the word uke means to receive. According to Kane and Wilder the word ‘receive’ implies active ownership. This ownership means that when the ukete (defender) receives (and owns) the aggressor’s attack he can use an uke technique to either defend (by deflecting or re-directing an incoming strike or applying a lock) and/or counter-offend (e.g. by using an age uke to strike under the aggressor’s jaw) and thus bring the conflict to a swift end.

Karate is conceptually different to some other martial arts in that it is not entirely defensive. In jujitsu and aikido all techniques are defensive – they are designed to stop the attacker by locking or throwing them to the ground. Karate is both a defensive and attacking art – it is based on the premise of ‘one strike, one kill’ and supports the use of pre-emptive striking as a method of defence. Though other arts do use striking techniques they are generally just used as ‘weakners’ to soften the opponent up before the lock or throw is applied. In karate the strike is the definitive technique used to bring the conflict to a swift end.

However, the terms ukete and semete are not commonly used in karate clubs and it is difficult to find references to them in the literature. The terms ‘attacker’, ‘defender’ or ‘opponent’ are more commonly used.

Do you use the terms ukete and semete in your karate club?

This work is licensed under a Creative Commons Attribution-Noncommercial-Share Alike 2.0 UK: England & Wales License.
Posted by Sue C at 16:13

I think you'll find that in jiu-jitsu (and judo) there's provision to launch a pre-emptive attack. Uke is the person who receives the technique, regardless of whether uke launched an initial attack that was countered by tori, or whether the technique is applied by tori directly.

So are you saying that you can't directly map the terms uke and tori to attacker and defender because sometimes they are interchanagable? And if tori applies a technique directly without an initial attack being launched does that make him the aggressor or is that an example of a pre-emptive and therefore 'defensive' attack? Or is this all just semantics and not really important! lol

It's easier to make sense of the uke/tori roles if you work backwards. Tori applies the successful technique to uke, who receives it. It doesn't matter who started it; it's who finished it that counts. ;-)

Hi Dan, I agree - it's who finishes it that counts! I think I'll stop tying myself in knots with this tori/uke thing :-)

This character is pronounced SHO in Chinese and also means to accept or to receive.
I would like to add to the excellent presentation that karate blocks are also strikes, and vice-versa; from that angle, it matters not how it is called any longer outside of a convenience to pass on knowledge.
osu!

Welcome back Fred! Yes I agree, blocks and strikes are pretty interchangeable in karate. Thanks for adding your little extra knowledge to my post!

I'm not sure about the whole 'blocks as strikes' theory: if you're not properly conditioned (and yes I do know there are specific forearm-toughening exercises in karate) or you don't posses more mass and strength than your attacker you're likely to injure your own arm and if you lose the full use of an arm in a fight it'll cost you. In defense I wouldn't block hard but parry & deflect, guiding the attacking arm or leg past the target and setting them up for the counter. This is far more economical (conservation of energy) and it doesn't carry the aforementioned risks. What you can do is hit specific points on the attacker's limbs but this should be done with simultanous evasion and/or parries.

For the original question I agree with Dan.

Zara - You're right about not blocking hard in a self defence situation, this applies in karate too. As I said in the post, the 'block' should be interpreted as a 'receiving' technique which can be defensive or offensive. Like in jujitsu we would aim to avoid or deflect an incoming strike rather than try and block it hard (which wouldn't work). When a 'block' is applied hard it is usually because it is a strike and therefore an offensive technique used as a counter attack e.g an age uke technique to the throat or a gedan barai strike to the groin. All strikes should be aimed at weak areas of the body to cause maximum harm to the opponent and minimum harm to the defender.

Michele - I'm sorry if I've confused you on the uke/tori thing but it sort of makes sense for the ukete to be the person receiving the attack by using an uke technique, but like Dan said, it's all just semantics really!

New here, and late to this topic-but I have to disagree about not using "hard" blocks in self-defense situations. If you hurt your own body by doing ANY techniques, you're not doing it correctly.

Hi Mark, it's never to late to join in! Any tips for avoiding the bruising I get on my forearms from 'hard' blocking! Perhaps I'm not doing it right, then again I do bruise easily!