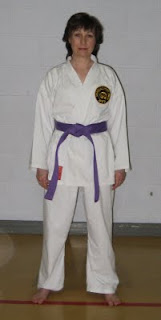 The word gi literally means 'dress' or 'clothes' but is often used to mean 'uniform'. Using the word gi to describe a martial arts uniform is common in English but is an incorrect use of the term in Japanese where the full name of keikogi is used. However, it is common to replace the word keiko with the name of the martial art being practised, such as karategi, judogi or aikidogi.

The gi consists of uwagi or jacket, zubon or pants, and an obi or belt.

So where did this almost universal style of martial arts uniform come from? Some sources suggest that the karategi originated in Okinawa as a functional garment that resembled the clothes that peasants and farmers were already wearing. It is suggested that the garment was designed to be light, with short sleeves and legs to make training easier in the hot sun, whilst still being suitable for both night training and sleeping in. However there is much photographic evidence that Okinawans actually trained in shorts and t-shirts or even just in their underwear! Sensei Funakoshi (founder of Shotokan karate) himself trained in shorts and t-shirt right up until he went to Japan. (You can view a photo of typical early Okinawan fighters in training here)

It is unlikely therefore that the gi originated in Okinawa. It's introduction as a martial arts uniform is generally attributed to Jigoro Kano who developed judo from jujitsu in the early years of the 20th century. Sensei Kano's first students wore their everyday kimonos to practice, so he had them wear black sashes to keep the kimonos closed while they grappled.

However, the light weight materials used in kimonos were not suitable for grappling arts and Sensei Kano restored to use a uniform based on an ancient one used in old jujitsu made of linen, in coffee colour and covered with cotton fabric. The ancient stories say that due to the effect of the sweat and the intense rubbing of the practices plus routine washing, they would turn white naturally. Due to this, when Sensei Kano decided to restore the official outfit for Judo, he took into account the above, and decided that the most suitable colour would be white.

Senseis Kano and Funakoshi were good friends and when Funakoshi came to Japan for the second time in 1922 to demonstrate karate at Sensei Kano's Kodakan (the central dojo for judo in Japan), Kano was alarmed that Funakoshi was going to do the demonstration in shorts and t-shirt. Kano persuaded him to borrow a judogi so that he would look more professional in front of the dignitaries he was trying to impress. Funakoshi agreed and later took back the gi to Okinawa as a gift from Kano. The wearing of the gi then spread throughout Okinawa as well as Japan in karate dojos.

In judo there are exacting standards for the weight, size, style and colour of the gi - particularly for competitions. The gis are thick and heavy for durability. In karate the gi was modified to be thinner and lighter with shorter sleeves and legs to aid kicking and striking. However, many karate practitioners prefer a heavier weight gi for kata work (particularly in competition) as it gives a characteristic 'snapping' sound when movements are performed quickly and sharply.

Is it still relevant to wear a gi in martial arts today? Many modern martial arts such as kickboxing and mixed martial arts have dropped the gi as a uniform and tend to wear more modern clothes such as shorts or t-shirts and track pants. However, most traditional styles of martial arts have retained its use or wear a modified version, often in a colour other than white.

There are five reasons put forward as to why a traditional gi should be worn:

2. Uniformity and organisation. The wearing of a gi helps us to see at a glance who is of which rank, who is sensei and who is a student. This organisation of rank and hierarchy enables one to have organisation of thought and a sensible progression of training. It enables individuals to know their position and what must be achieved to raise their position in the dojo.

3.Commitment. When an individual values a uniform that individual becomes more committed to the art in which they belong for a greater length of time.

4. Practicality. A gi is comfortable, practical and hard wearing. It is fit for purpose. Remaining comfortable allows one to continue training for longer periods of time which should result in achieving greater ability.

It seems the gi is more than just a uniform but is a symbol of all that it means to be a martial artist. Keep it neat, keep it clean, wear it with pride.

This work is licensed under a Creative Commons Attribution-Noncommercial-Share Alike 2.0 UK: England & Wales License.
Posted by Sue C at 15:12

Great post, Sue - you never disappoint! Thanks for sharing your research in such a practical way! Is it OK to print it out and share with the class mudansha?

Felicia, thank you. Of course it's okay for you to print and share with your class. I'm glad you liked it.

As far as I know the gi is worn mainly because it closely resembles the clothing (kimono) worn in Japan in the old days. The colour white stands for death and mourning (like westerners would wear black at a funeral) and it was an outward sign the practioner or warrior was ready to lay down his life on the battlefield (mortal combat is after all what karate, ju-jutsu and other arts were orignally intended for). Basically wearing white would suggest you considered yourself already dead (a living corpse so to speak), this has close ties to the Zen concept of mushin or mushin-no-shin (no mind or mind no mind): letting go of conscious mind including thoughts of self and life or death. According to a number of sources this was considered the core of Bushido or the martial-ethical code of the samurai: only by voluntarily relinquishing life could one hope to do well in battle and adequately perform one's duty towards one's master or daimyo, one's comrades and one's parents. An example of this emphasis on death can be found in the Hagakure, a samurai-manual written in the 16th century by an ex-samurai turned monk called Yamamoto Tsunemoto: in the very first chapter an enquiry is made into the true essence of Bushido. The anser is simple: "The Way of the Warrior is found in death; when it comes to either/or there is only the quick choice of death."

In the old days training was geared towards warfare (a common occurence, both in Japan and Okinawa) and sons of noble families were considered suitable for service upon reaching their 16th birthday. An all important part of bujutsu or the warrior-arts is mental training and this consists first and foremost in coming to terms with the possibility of a violent death and this is reflected in the garments worn in the dojo. Since the major styles of karate (wado, shotokan, kyokoshinkai...) were established in Japan and Japanese martial-arts are founded on the principles of Bushido the custom of training in a white gi found its way into karate.

Nice background on the history of the gi. Interesting that it was Kano who convinced Funakoshi to wear the judo gi at his karate demo. I didn't know that.

Personally I favor the traditional white gi. Some of the other colors are okay (I've seen photos of Okinawans donning black ones), but I have to say the flashier ones do no justice. Camouflage or overly patched up uniforms strike me as being a bit gaudy.

Zara, thanks for this bit of additonal history - very interesting.

John, I agree that a plain white gi is best - simple and uncomplicated.

I agree with your points.

I think seeing children (and even adults!!) sometimes with 6-12 patches on their uniform is too much though. Martial arts is not the Boy Scouts/Girl Scouts.

Hi T, I agree with you. In my karate club we maintain simplicity with just one 'Association' patch but unfortunately in my kobudo club they are patch mad! I don't like it but its the only kobudo club in town and my instructor is excellent. I've so far got away with having only 2 patches but the pressure's on for me to buy others - I will resist as long as possible!

I think that if there were one area of karate that I am poor in (I only WISH there were just one!) it would be the intellectual portion: history, philosophy, the 'how's' and 'why's', etc.

So, thanks, Sue, for helping me fill in some gaps. I'm happy to have found your blog and will continue to enjoy your insight.

Hi Brett, glad you're finding my blog useful, I hope you continue to visit:-)

The Karate Gi I use isn't up there but I highly recommend using Bushido Karate Uniforms! You can get them at
http://www.martialartsgear.com.au/what-makes-a-good-gi-.html The best Karate Gis use Cotton duck canvas of course. (Don't bother with polyester)