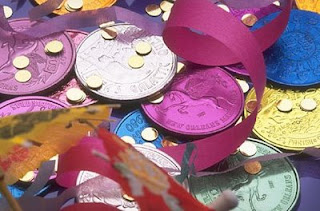 This week the Japanese are celebrating a festival called Tanabata also called the ‘star festival’. Tanabata is based on the fusion of an ancient Chinese festival called the Festival to plead for Skills in which girls wished for better sewing and craftsmanship, and boys wished for better handwriting by writing wishes on strips of paper, with a Shinto purification ceremony in which a Shinto miko (shrine maiden) wove a special cloth on a loom, called a Tanabata, near waters and offered it to a god to pray for protection of rice crops from rain or storm and for good harvest later in autumn.
In a modern day Tanabata festival the elements of these two ancient ceremonies are still celebrated by writing wishes, sometimes in the form of poetry, on tanzaku ,small pieces of paper, and hanging them on bamboo outside houses, sometimes with other decorations in the hope that these wishes come true. The most common tanabata decorations are colourful streamers, which are said to symbolize the weaving of threads. Other tanabata decorations are toami (casting net), which means good luck for fishing and farming and kinchaku (hand bag), which means wealth. The bamboo and decorations are often set afloat on a river or burned after the festival, around midnight or on the next day.
However, as with much folklore in Japan there is also a love story behind the celebration of this festival. It is said that two gods Orihime (the Weaving Princess- daughter of the Tentei, Sky King, or the universe itself ) and Hikoboshi (Cow Herder Prince) met and fell in love. They were so besotted with each other that they neglected their duties and in anger the Tentei separated the two lovers across the Amanogawa River (Milky Way) and forbade them to meet except for one day a year – the seventh day of the seventh month. It is said that a flock of magpies form a bridge across the Amanogawa River with their wings so Orihime can cross but if it rains the magpies cannot come and the two lovers must wait another year. Often during the tanabata ceremony people pray that there will not be rain so that the lovers can meet.
Tanabata festivals are held all over Japan in the main cities, though some are held on August 7th rather than July 7th. Today the big festival will be in Hiratsuka. The streets will be decorated with elaborate streamers and there will be many side stalls selling food and souvenirs.

This work is licensed under a Creative Commons Attribution-Noncommercial-Share Alike 2.0 UK: England & Wales License.
Posted by Sue C at 14:35

a very cool post. Thanks for teaching about the tanabata festival!