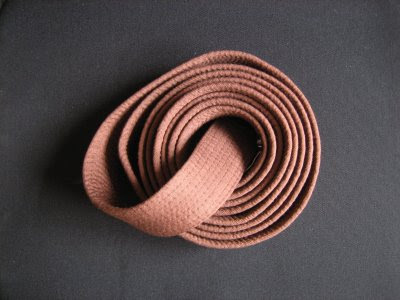 I've finally achieved my 3rd kyu grade. I know this will not seem like a big deal to experienced black belts but I am pretty pleased to be finally wrapping a brown belt around my waist!

Fortunately the weather was kind and it was not hot and humid as I thought it might be so we didn't get overly hot. There were only seven of us grading in my group which is the smallest number I've ever graded with. This meant the grading only took about 1 hour (my blue belt grading lasted nearly 3 hours because there were so many of us).

I had another chance to try out my sparring skills in competition conditions as we had to do 2 rounds of sparring. Since I was the only woman in the grading session there was no choice but to partner me with men. Don't worry, I went easy on them! I decided to pare back on the aggression a little and it seemed to work - I won one round and lost the other.

As we get scores for the individual elements of the grading (10 elements) you get immediate feedback on which things you are strong at and which ones you are weaker at - and it's never the way I expect it to be! My highest score was for the Ippon kumite and my lowest for one of the kata. I messed up a bit doing pinan sandan (which is a green belt kata). For 3rd kyu the grading officer randomly picks a pinan kata which you then have to perform there and then without any practice. I have been practising all the pinan katas recently but pinan sandan is my least favourite! At least I performed Annanku and Jurokuno to a reasonable standard.

Everything else seemed to go alright and I was happy with my total mark of 67/100. The other students also passed with good marks - so congratulations to them. Now starts the hard work for 2nd kyu!

Email ThisBlogThis!Share to TwitterShare to FacebookShare to Pinterest
Labels: Grading

Congratulations! You mentioned that it won't seem like a big deal to experienced black belts -- but I disagree. Maybe it becoems less important for our own rank, but as an instructor, I share vicariously in my students' promotions. It's a great thing to see students get those new ranks.

In my own training, my time spent at brown belt holds some of my fondest memories. Enjoy!

Let also add my own congratulations to the list Sue.

I also agree with Pete's comments and I can also remember when I took my 3rd KYU and how I felt about putting that brown belt around my waist.

Thanks everyone - I will wear my brown belt with pride tonight at class!