Karate and the Sword.... 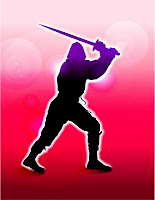 Now, I don't know about you but I don't tend to associate the use of the sword with karate. I associate it more with Japan, Samurai and jujitsu. It is not an Okinawan weapon. However, according to Mabuni Kenei, the philosophy and strategy underpinning Shuri-te style karate comes directly from the Jigen style sword techniques.

Shuri-te karate was developed and perfected by the 'Master of the fist', Matsumura Soken (1800-1896).  Shuri-te is widely believed to be an amalgam of native Okinawan te and Chinese kempo and both Matsumura and, before him, his teacher Sakugawa 'Tode' Shungo (1733-1815)  travelled to China to study Chinese kempo. However, Matsumura, who worked as a bodyguard and administrator at Shuri castle, was also sent to the Satsuma province on mainland Japan where he learned the Jigen sword technique.

The Jigen sword technique is different to other sword styles in that it only has one kamae position - hasso no kamae. In this position the sword is held pointing up to the sky with the elbows positioned at shoulder level and standing sideways on to your opponent. The swordsman then steps through with the back leg towards the opponent, swinging the sword down with great speed to cut the opponent diagonally from the neck through the chest and exiting the body underneath the opposite arm, accompanied by a loud kiai.

The aim of the Jigen technique is to kill with the first strike. Sound familiar? Training is aimed at performing this cut at increasingly faster and faster speeds until it is lightening quick. The highest level of perfection was called flame cloud. The speed of a flame cloud cut was one rin. In modern methods of measuring speed one rin equates to performing the cut in 0.00075 seconds! Masters of the Jigen technique were said to be able to, '... cut raindrops falling from the roof three times before they hit the ground.'  Training to achieve these speeds, which required a lot of mental concentration, was done using a wooden sword to hit a wooden block diagonally from left to right with a loud kiai. This training technique was called 'hitting a standing tree'.
Matsumura achieved flame cloud and became a Master of the Jigen sword technique.

Matsumura was highly influenced by his Jigen sword training and it was he who introduced the basic principle of 'kill with the first strike' into karate. It was also Matsumura who invented the makiwara striking post, based on the 'hitting a standing tree' technique, in order for the karateka to practice improving speed and mental tenacity with punching.

In karate the arms are often said to be our weapons. Master of the sword, Nakayama Hiromichi (1869-1958) said, '....the karate fist is definitely a sword.'

In my kobudo classes one of the weapons that I study is the bokken and I can attest that the principle of movement needed to perform a quick sword cut is the same as that needed to perform a rapid punch in karate - a combination of 'hard and soft' to achieve the whipping motion needed to generate speed. But then I shouldn't be surprised by that if karate striking techniques have been influenced by the sword...

This work is licensed under a Creative Commons Attribution-Noncommercial-Share Alike 2.0 UK: England & Wales License.
Posted by Sue C at 13:02

I've had heard about this relation before, but your explanation was very clarifying.

How cool is that?!? Thanks, Sue, for once again aiding and abetting the "something new" I learned today :-)

Hi guys! Thanks. Infact the whole book is very interesting so I may write a review of it when I've finished reading it.

Your blog is of particular interest to me given I'm currently training two students for their shodan in Jan de Jong jujtusu (aka Tsutusmi Hozan ryu jujutsu). There are a number of gradings including one in which five sword techniques are demonstrated along with their equivalent unarmed techniques. The idea is the kata is suppose to illustrate the relationship between the sword techniques and unarmed techniques. In that regard, the kata/grading is of interest but of little practical benefit. However, what I've found is that the sword training brilliantly teaches and trains the student in the attitude when confronting an opponent. Not bouncing all over the place as is seen so often in sparring and competition but to wait and go when you go. To adopt a stance which has mobility as its foundation but change to stability when executing the technique after evading the attack. Too much to describe and too little space as its only suppose to be a comment. Maybe a subject better left for a blog of my own.

Hi John, I like the way you are relating the armed and unarmed techniques together in this way. I love the way these 'indirect' training methods (ie. have no direct combat application) teach such important principles as good body movement, body alignment, distance, timing, attitude, intent etc. They add a greater richness and depth to the training and prepare the mind better than just direct applications. I'll look forward to your post!

This write is totally informative and I must say I learned so much about it. Reading is always the best way to learn new things... Karate and the sword could be a great combination but I never tried it. Anyway, thank you for sharing this valuable information. Keep up the good work.

Edward, thank you very much for your kind words.