Bassai Dai: to extract and block 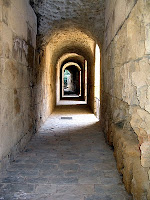 Since becoming a 1st kyu student I have started to learn the first of the black belt katas – Bassai Dai. This is an important kata for many systems and is often chosen as the kata to test students for their black belt. It therefore resembles a ‘rite of passage’ for many karate students and so becomes a much coveted kata.

There are many variations of the Bassai kata (Passai in Okinawa) and it is found in Okinawan, Japanese and Korean styles of karate. It is likely that its origins are Chinese as it is thought to resemble Chinese Leopard and Lion boxing forms.

The origins of the kata are thought to be about 400 years old. The evidence for this is the existence of a carbon tested silk drawing of the form. It is said that the form was created as a left-handed one and if you bear that in mind when performing it then several hidden techniques are revealed!

However, this early history of the kata is a little vague and confused. What is clearer is that there were two versions of the kata practiced on Okinawa. First, there is the Matsumura version, which he allegedly brought to Okinawa following a stay in China. Matsumura learned Chinese boxing when he visited Fuchou and the Matsumura version is said to have a ‘Chinese flavour’ to it. Matsumura’s style of Passai was light and flowing with fast attacks and counters, but little power. It was circular and light.

The second version is accredited to the karate master kokan Oyadomari who lived in the Tomari district and practiced the Tomari-te style of karate. It is said that he was taught the kata from a visiting Chinese man. This version was more ‘Okinawanised’, showing a more linear style and a greater emphasis on muscle power over light speed and more direct force over whipping techniques.

Itosu was a student of Matsumura and a contemporary of Oyadomari (they all worked as bodyguards at the Shuri castle) and would probably have learnt both versions. However, instead of working with the Matsumura version as one would expect, he developed the Oyadomari version, making it even more linear and passing it onto his students, including Funakoshi who then took it to Japan.

There is much confusion over the meaning of the name Bassai. It is commonly thought to mean, ‘The storming of a fortress’, but this is more likely to be a misinterpretation and is certainly not a direct translation of the kanji characters for Bassai. A more literal translation of Bassai is, ‘To extract or remove (an obstruction) and to block (a corridor or passageway)’. It was Funakoshi who changed the name from Passai to Bassai when he took the kata to Japan.

The Bassai kata is characterised by the idea of changing a disadvantage into an advantage by the switching of strikes to blocks and blocks to strikes. It uses a lot of hip rotation to generate power and its execution requires a lot of spirit, with fast moves and proper attention given to an appropriate balance between speed and power.

The version of Bassai Dai that I am learning is the Itosu version as practiced by Shito Ryu stylists. Here is a video of it:

This work is licensed under a Creative Commons Attribution-Noncommercial-Share Alike 2.0 UK: England & Wales License.
Posted by Sue C at 16:54

Ooooo, Sue! My sensei studies other styles including Shotokan and talks about this kata lots - but I'd never seen it before. It's amazing! Love the koshi (hip) action and it is very linear and clean. Looks like there are about a million techniques to it though! You will undoubtedly have fun learning and tweaking it :-)

Hi Felicia, this kata is definitely big in Shotokan circles - I think they do the same version of it as we do. I'm looking forward to learning it - so far I only know about the first 4 moves and that opening step is trickier than it looks! I think there is some interesting bunkai to be learnt too.

I just wanted to congratulate you on your recent grading and success. Well done. I've enjoyed reading your blog.

Bassai Dai is the 3rd Kyu (purple belt) kata for my school. At the moment just watching it brings me out in a cold sweat! LOL. I've got a good long while to go before I'll be worrying about having to remember it, thank goodness!

It must be really exciting to be embarking on your black belt katas though...... the journey of a thousand miles begins with the first step and all that.

Good luck with your fortress storming ;)

VERY nice!! We don't have this kata in Isshin-ryu. I think we have many of the same movements that are pieces of other kata. This is really nice, though. :-) Good luck with it!

Journeyman - Thank you. I've now found your blog and left you a comment!

Marie - wow! you get to learn it early on. What do you have to learn for black belt?

Frank - Thank you. I believe most of the katas in Isshin-ryu came from Chotoku Kyan and Chojun Miyagi and they are not part of the Passai lineage. Shame you're missing out but I expect you have some pretty good katas in your system too.

For 2nd Kyu we have Seunchin, for 1st Kyu its Empi and for Shodan its Sanseru and Sepai. I'll have to grill Shihan about the origins of our Katas I think. I love finding out all the historical stuff. I never thought I'd be interested in that side of karate but I'm really coming to enjoy it.
xMx

Hi Marie, researching the history of katas is hard work! You need to look around several sources and then put together the story yourself, though a few katas already have quite a lot written about them. One thing you come to realise is that a kata with the same name can have a completely different lineage and be a completely different kata! You have to trawl through a lot of YouTube footage to find which variation of a kata your system uses - not for the faint hearted!

You're right, Sue. Isshinryu is mostly a synthesis of Gojo-ryu and Shorin-ryu, and most of our kata come from those systems, with various small changes made to each, by our founder, Tatsuo Shimabukuro. (shortened to Shimabuku.)

Ahh, Bassai Dai. This was my favorite kata when I trained in Shito Ryu many years ago. The way we learned it was very much like in the video you posted, however in the beginning we used to do it with back stances instead of cat stances and a few other minor differences. After I'd been doing it that way for a few years, the organization changed it to the version with cat stances - that totally screwed me up!

Now in Yoshukai karate I am beginning to learn Bassai, but our version is very very different - you have to look hard to recognize any similarities.

Keep up the great posts - I find the history behind this stuff very interesting.