Training with Nunchaku, not a rice flail... 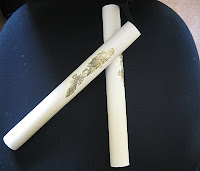 Since my last kobudo grading in July I have been working with my latest choice of weapon - Nunchaku. I have had only three lessons so far and I have to admit, I'm finding them rather tricky!

Nunchucks are an intriguing weapon with a distinctly unclear heritage. The story of Okinawan peasant farmers secretly training to use 'rice flails' as weapons in order to defend themselves against their many foes during the occupation of their island by the Japanese Satsuma clan in the 17th century is probably just that - a story!

A more likely scenario is that the weapon was 'purpose built' by the Okinawans, based on a similar Chinese weapon that may have been imported to Okinawa by Chinese immigrants. Apparently nunchaku is a Japanese pronunciation of a Chinese term meaning 'two section staff'. Alternatively, nun means 'twin' and shaku (a traditional unit of measure used throughout Asia with a length of approximately 1 foot), is the length of each arm of the nunchucks.

Traditionally the nunchuck is made from hardwood such as oak, which would have been hardened by soaking it in mud for several years, where the optimal acidity and lack of oxygen prevented it from rotting. The wood was then sanded and oiled to preserve it. Horse hair was traditionally used to secure the two arms of the nunchuck together.

Though my husband owns a pair of wooden nunchucks, I was advised by my sensei to use foam practice ones. I am glad that he advised this (as is my husband, who is my training partner) because otherwise we would both be covered in more bruises than we already are. Like I said before - nunchucks are tricky!

Is there any point in training with nunchucks? After all, they are illegal to carry around with you in the street in most countries. In the UK, they can legally be used in martial arts training and carried to and from the dojo but would be considered an offensive weapon in virtually every other situation. And lets face it, I'm not likely to suddenly spot a discarded rice flail in the street if I get attacked!

Despite legality issues there is value in training with the nunchucks and this value is two-fold. Firstly, it preserves a traditional martial art form and so it has cultural and historical value. The same is obviously true for many other martial arts weapons. Secondly, it has value in improving eye-hand coordination; quickening reflexes; increasing hand strength, control,speed and accuracy; and can help teach and improve correct posture. These are valuable training aims for many martial artists.

In Okinawan based martial arts the nunchucks are primarily used to grip and lock an opponent with striking used to subdue or finish off the opponent. This is the way that I am learning to use the nunchucks. So far I have learnt various blocks, a wrist lock, a wrist throw, an arm lock, a head and hip throw and a couple of strangles. One of the advantages I am finding is that the bio-mechanics of locks and throws are more apparent when I have to apply the weapon to make them work. If I don't position the nunchuck at the correct angle over the back of my opponents hand so that it bends AND rotates the wrist correctly the wrist throw will not work and the opponent can slip his hand out. This also makes me think more carefully about how I apply a wrist lock without a weapon.

There are disadvantages, of course, to using foam nunchucks. They are very light, are probably not balanced as well as wooden ones, they require your opponent to simulate the effects of some techniques and they are liable to break. I have been warned that I may get through several pairs of foam nunchucks! When I have gained some proficiency with this weapon then I would like to progress to wooden ones but for the time being I am happy (and safer) with my foam ones! Not to mention my son bought them for me for my birthday - what else do you buy the woman who has everything?

Here's a video of an elementary nunchuck lesson:

This work is licensed under a Creative Commons Attribution-Noncommercial-Share Alike 2.0 UK: England & Wales License.
Posted by Sue C at 15:19

I just LOVE that your son bought you nunchucks for your birthday. How cool is that? LOL.

I was never really interested in the idea of weapons training but the more I learn about martial arts and the more karate training I do the more intriguing the idea becomes. Our Shihan does weapons training for higher grade students to it's definitely on my agenda for some point in the future. I doubt the nunchucks would be first on my list though - I suspect I could do myself some serious damage with those things (foam or otherwise! LOL).
xMx

Hi Marie, that's the thing about kobudo - you're never short of gift ideas!

OMG... I would bloody my own nose and probably give myself a concussion! Hahahaha...

We have some weapons forms in Isshinryu, but I'm not real excited about them. We have Tonfa, Bo, and Sai. The only one that I can see the real practicality of, is the Bo. Just about anything can be used as a staff, after all.

Probably the least practical of our weapons forms, is the sai. I just don't understand what real benefit twirling around a couple of Chinese knives is going to accomplish...

But, just like your Nunchaku, for tradition's sake, and for the hand/eye coordination, I'll probably go ahead with it, when the time comes.

Good luck with your nunchaku training and practice!

One important thing to remember when practicing indoors:

Hi Frank, if nothing else, weapons training is fun (and painful!). And those physical things I listed really are starting to happen for me :-). Let's face it, life would be pretty dull if we only ever did things that were entirely practical!

Hi T. We've already discovered the light thing, not to mention plaster dints on the ceiling! We now do all our kobudo practice outside!

You're right, Sue. If we only did things because they were practical, life would be pretty bland, wouldn't it?

I remember a quote I read somewhere that said, "There are two reasons for ever doing anything: Because it is needful, or for the sheer joy of it." :-)

As I've thought more about nunchaku, I've realized that working with them would enhance one's reflexes, quickness, and sense of timing, similar to the way a boxer works a speed bag or a reflex bag. :-)

Frank, exactly! Some weapons are more useful than others but those that arn't - just think of them as a useful training tool instead :-)

SueC - I was intrigued to see you're being taught to cature and apply joint-locking, throwing, and takedown techniques with the nunchaku. That is extremely rare in my experience. The majority of nunchaku trainging that is around is striking based (and the ubiquitous twirling). While they are not part of our grading system, Jan de Jong taught us nunchaku which replicated the jujutsu approach which you appear to be being taught. Other techniques than just striking (and twirling). I hope you appreciate the uniqueness of your instruction.
I know I didn't until I started to study other martial arts and jujutsu styles.

Hi John, the kobudo syllabus that we are following is closely allied to jujitsu (it's a joint jujitsu/kobudo club). This presents a few problems for me because I'm not technically a student of jujitsu and so I'm not familiar with most of the throws even when they are performed empty handed. To overcome this my instructor has put together a jujitsu program for me that just covers the locks and throws that are found in the kobudo syllabus for the weapons I have chosen to study. So far this is working out okay but I won't actually be grading in jujitsu - just in kobudo.

I didn't realise that our style of syllabus was so rare! We do do a bit of twirling but I don't have any kata to learn on my current level. It's virtually all blocks, locks and throws.

Great stuff Sue! I think starting with foam is a very safe and reasonable approach.

Another interesting piece of nunchaku history/mythology is that they began as a horse bridle, which you can see here - http://www.ryukyu-kobudo.com/images/buki_images/nunchaku_horse_bridle01.jpg

Rice was and is a much less dominant crop on Okinawa than a lot of people assume.

However, in my opinion both 'histories' were developed by the okinawans as cover ups for having another tool-weapon on hand to fight with.

Hi Matt, yes I'd read that about horse bridles -they say that nunchucks were originally curved,like a horse bridle but I'm not sure I buy that one!

After reading your post, we are going to work on nunchaku throws and locks in class next week. It has been a while since we worked applications with the nunchaku.

Thanks for the great article!

Hi Michele, good luck with your class. I actually like the fact that our kobudo system concentrates very much on direct application rather than just lots of manipulation. Manipulation looks good and trains you to handle the weapon well so it's useful but if we never progress to application then there's probably no point!