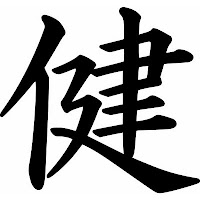 Following on from my article on Chado (Japanese tea ceremony) and its similarities in philosophy and guiding principles to karate-do, I have found a couple more Japanese Ways that also have a strong spiritual or philosophical component as well as technical skill:
Shado. The way of the brush.
This is traditional Japanese calligraphy involving the writing of Japanese Kanji characters. However it is more than merely writing. It has strong connections with Zen buddhism. It is said that to write Zen calligraphy with mastery, one must clear one's mind and let the letters flow out of themselves, not practice to hard or make a tremendous effort. This state of mind was called the "mu-shin", or "no mind state", by the Japanese philosopher Nishida Kitaro. I've heard the same said about letting kata flow through you rather than thinking too much about it and trying too hard.

From the website Crimson Bamboo. they quote the following : "On instructing the student painter and calligrapher the Old Ones would have taught ‘ … when viewing a perfect painting, I see it is the Tao, not only a picture, this painter has left behind all cunning skill. … See things in your spirit, not in your eye; do not take outward beauty for reality. One’s brush strokes in writing should have strength, directness, and truth, yet be round and gentle, just as your dealings with other people ought be as virtuous. Of the six essentials to painting and calligraphy, such as brush, ink, motive, etc, the first essential is ‘spirit’. … ’ ." Strength, directness, truth -it's all sounding familiar! Here's a video of some Japanese Calligraphy...


Kodo. The way of fragrance.
This involves the gentle burning of incense or fragrant wood. The wood is not burnt directly as this would give off an acrid smell but instead its fragrance is released in a gentle way by placing the wood on a mica plate and heating it over smoldering coals.

In the sense that smells can evoke memories that transport you back to another time such as your childhood, in kodo the art is to get participants to 'listen' to the smells rather than 'smell' them. The idea is to open up the heart and spirit with fragrance rather than just stimulating the nasal passages. In Japan, the burning of incense and prizing of rare scented wood has been transporting people to a different spiritual plane for many centuries (though I have a sneaky suspicion that that there may be certain pharmacological reasons for this rather than entirely spiritual- depending on what's being burned!).

The modern equivalent of kodo is probably aromatherapy. For more information on kodo visit this link: kodo .
Here's a video of an incense burning ceremony...


I think a common link between all these Japanese Ways, whether it be chado, kodo, shado or budo, is that they all require this concept of mushin in order for a practitioner to become truly a master of their art.

Informative post. I liked the concept of 'listening' to smells. Some of my fondest childhood memories are prompted by the sense of smell.

You reminded me how much pleasure I get from "burning" scented oils! I have a little oil pot that has a place for a tea light underneath and likewise the oil isn't truly "burned" it's boiled into the air and it's so lovely. I used to sit and watch the candle flame flicker while a patchouli/rose blend would waft upwards and just *not* *think*. Sounds a lot like that mind state you were talking about.
Thanks for the reminder!

Great post! Not heard of kodo... do you think they are all linked by ideas of Zen? Being lost in exercising a particular routine?

Am reading Zen and the art of archery so am a bit Zen-sensitive
:-)