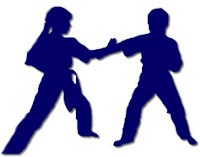 Sensei asked me to come in early last training session to help teach some kata to the junior class. When I arrived he asked me to take a young girl (aged 7) through pinan shodan as she is grading on Saturday. She basically knew the routine but performed it with a heavy heart and very little effort. She did it with me once and then refused to do it again. I asked her what was wrong and she said, 'karate's boring, kata's boring, I don't want to do my grading.' I asked her if her parents made her come to karate and she said yes. She had been told that she couldn't drop out until she had done two more belts. I actually felt very sorry for her (she's very cute) as she stood there looking the picture of misery.

Why do parents insist on making their children do hobbies that they don't want to do just because they think it will be good for them? I have seen several children in this predicament and they clearly get very little out of it. Many of them misbehave or talk when they should be listening and they often look miserable or bored. This is not sensei's fault , he works hard to keep the children occupied and varies the activities to keep the class varied and interesting. He is not afraid to rebuke particularly naughty children and will discuss their behaviour with their parents. But still these children get brought back to class week after week.

Martial arts is often sold to parents as 'instilling discipline', 'character building' or 'confidence building'. Lets face it, these claims are far-fetched. One hour per week is not going to instill discipline into an undisciplined child. Discipline has to start at home and any child coerced by their parents into doing a sport or hobby that they don't enjoy is going to have their confidence undermined, not promoted. Surely it's the characteristics that a child (or adult) bring into the dojo that determine their success. An eager, disciplined self-motivated person will do well in martial arts. They will bring life and enthusiasm to the class that may well rub off on less confident students and enhance the experience for everyone. The disinterested, poorly motivated student will be a distraction that can sap the energy from the whole class.

I had started to form the opinion that young children just weren't ready or mature enough to study martial arts and maybe shouldn't start training until they are about 11 or 12, but then you occasionally meet a child who is particularly good and inspiring - I have seen such children in competitions - and I think it would be unfair if these children had not had the chance. What is your experience of children in the dojo? Do you think 6yrs is too young to start?

To end on a positive here's some video of some excellent karate from some enthusiastic, well motivated children:

Email ThisBlogThis!Share to TwitterShare to FacebookShare to Pinterest
Labels: musings mutterings and moans

How sad for that little girl. It's really good that you took the time to go in early and help with the children. Maybe she will remember your kindness when she thinks back to her Karate days.

My Master once said to the kids who were dragging their heels, "C'mon, I'm not a cheap babysitter!". Possibly not the best encouragement but it made me laugh.

When to start children in martial arts? I don't thing that one size can fit all.

One of the joys of teaching adults is that they are there because they want to be there. With children it is a bit more complex because of the dynamics with the parents.

With my own kids, who are still quite young despite insisting that they are "big", we "play judo" from time to time at home, and I take my five-year-old every month or so to a kids class where he participates in the bits that he likes -- the games, the groundwork randori and the rolls (at this stage) -- and over time he is gently encouraged to participate in more and more parts of the class. When he's ready -- fingers crossed -- we'll start attending regularly, and at that stage his younger sister will undoubtedly want to come along too!

I can identify with this one, because our youngest son thought he wanted to take karate, and then after about four months, knew it wasn't for him. We did make him finish out the quarter and he got his first belt, but didn't force him after that.

The blog is really looking great. And your sidebar stuff is a lot of fun to peruse. One nitpicky thing I noticed was that you need to take the word "text" out of your subscription widget title. Otherwise, it all looks terrific!!

What age should a kid start martial arts?...Ultimately, it depends on the child and their level of interest. We had outstanding students as young as five. (In Okinawa Kenpo there are age requirements for black belt.)

I think your comment on discipline is right on the mark. When parents come to visit the dojo, I use the word self-control rather than discipline for the exact reasons you outlined in your post.

My husband and I are both karate teachers and my daughter has practically no interest. We have taught her basic self-defense. We made the decision that we were not going to force her to learn karate. If she decides to take class, it will be because she wants to do it.

Latte Lady - I'm sure her mum will see the light! She allowed her elder son to drop out for quite a while and then he came back of his own accord and he seems to be doing well now.

Littlefair - I think my sensei probably feels like saying the same sometimes! Yes I read Micheles post when she first published it - I don't think we have any parents that bad!

Dan - Sounds like you have a good strategy with your son, it's great when you have the skills to test out their interest first before getting them fully enrolled.

Topsy techie - Yeah, one of my own sons dropped out after red belt and we didn't force him to stay either. I'll try and remove the word 'text' but that's how the widget came!

Michele - I think your use of the term self-control rather than self-discipline is very appropriate. I hope you daughter eventually gets the karate 'bug', it'll be a same if she doesn't as she practically lives in a dojo!

Teaching kids is tough. In the US, kids under the age of 14 constitute 85% of the students. Some schools here will actually teach 3-year-olds. That's how profit driven martial arts have become.

John - I think there are many profit driven martial arts schools over here too. Our own dojo isn't like that, our class fees and grading fees are very modest but sensei has to make a living out of it so he needs to keep the numbers up. He can only do this by admitting children. If he only allowed entry at 12 yrs he would have to raise the fees quite considerably, which may drive people away. So I suppose it's a trade-off....