I don't know about you but we've had a lot of snow this last few days (about 6 inches). It has bought the usual travel chaos and school closures but it has also created a beautiful winter wonderland!

My sensei texted me this morning to say that class tonight has been cancelled because the school where we train is shut. I texted back (half jokingly, half meaning it) that we should do training in the snow. He replied that he thought that was a cool idea and he was up for it. So I sent him a challenge that I would practice Seipai outside in my back garden if he would do something too. He texted back that he was going to do some kobudo practice outside.

Well you can't renege on a challenge with your sensei can you?

So I put my coat on and some boots and went into my back garden to practice Seipai. My son took these photos of me: 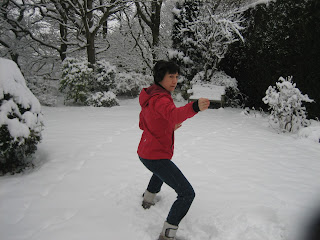 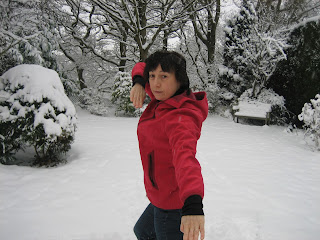 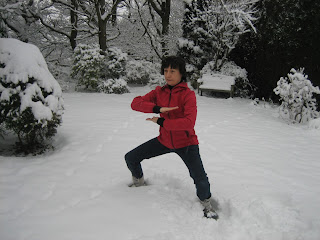 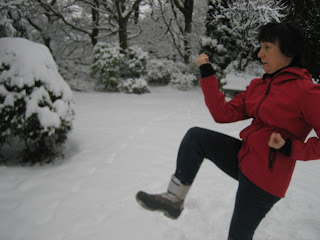 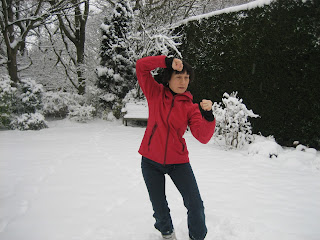 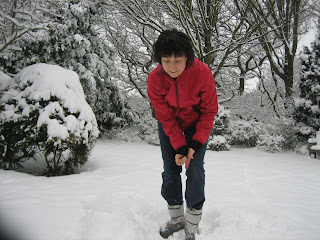 It's a lot harder doing kata in boots in several inches of snow and outdoor clothes make it difficult to be snappy with your moves. However, it was very invigorating and enjoyable out in the fresh air. I went through the kata about 6 times which got me pretty warmed up despite the 0 degrees temperature today!

I think I should do this more often, it adds a new dimension to training.

And just to show that my sensei kept his half of the bargain (though I expect he was planning to train outside all along anyway, he's pretty hardcore) here's the photo he sent me: 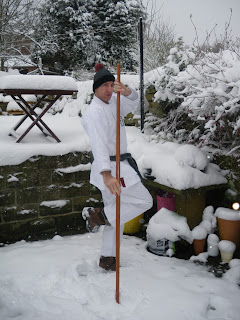 Okay, now I'm challenging you to train outside in the snow and post the evidence!

This work is licensed under a Creative Commons Attribution-Noncommercial-Share Alike 2.0 UK: England & Wales License.
Posted by Sue C at 14:46

Email ThisBlogThis!Share to TwitterShare to FacebookShare to Pinterest
Labels: snow

Great idea Sue, I often practice my Kata when I'm down the field letting our hens and ducks out, they provide surprisingly good feedback (or should that be feed-quack?)

The evidence is published! http://aikidoshoshin.wordpress.com/

aikidoshoshin - love the pics and the blog, I was a little worried that you might bring down a load of snow onto your head!

Rig, Great idea as long as they don't make you fowl up!

Aikidoshoshin, well done for taking up the challenge (only women so far I notice)

Sue - ha ha, I get the hint about women only (see blokes can get hints) unfortunately I won't be able to get any pics of me until the weekend and the snow might all be gone by then as I don't get home until after it's dark.

We're between snows right now (just got a dusting last night and much of what was on the ground has gone), but as more is scheduled for Friday, I'll post as soon as the white stuff has landed...

Wouldn't be much of a challenge down here in Florida. The temp here today is 66 degrees F (19 c)

I might just do some kata in my tshirt!

Looking forward to it Felicia...

Brett, Just a t-shirt? Won't you get arrested? LOL

I practice kata bare feet on the beach (even in winter, except when there is frost). It is nice to see the figure you leave behind in the fresh sand. You can check a lot this way. Training in the snow seems a great idea.Very nice.

dojodelft, kata on the beach - now that sounds like pure joy. Unfortunately I am far from a beach! Thanks for leaving a comment.

Great idea. Great commitment. But you're a pussy for wearing shoes. Commit women, commit. Did Oyama wear a wet suit or a shower cap when sitting under a waterfall?

John, My husband and I rolled around laughing at your comment - okay I'm a pussy for wearing shoes! Thanks for the laugh, brightened up my day!

Like your photos of martial arts in the snow Sue! Cannot hold up my side of the bargain, since we don't get snow here. Plenty of water though, will that do?

Matt, underwater karate will be fine - can't wait to see the pics!