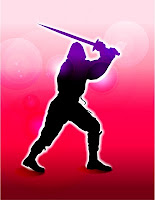 This is one problem of studying two different martial arts in different clubs - you subject yourself to twice as many gradings! In karate, as I have advanced along the kyu grades the gradings have become further and further apart: 3 monthly up to purple belt (4th kyu), then 6 monthly up to 1st kyu and now it's a minimum of 9 months before I can grade for black belt. This assumes that you train at least twice a week. For people only training once a week you can pretty well double the figures. Even after the minimum 9 month period you can only grade for black belt if you are invited to do so by the organisation and that will depend on how well you do at a pre-grading session.

In kobudo, however, my gradings remain at 3 month intervals and my next one is on Sunday. This time I am grading with the bokken. Our syllabus for bokken is based on Iai-jutsu and has 3 levels, my husband and I are taking level 1.
The level 1 bokken syllabus is much more demanding than the level 1 syllabus of other weapons and cannot be learnt to a high enough standard in just 3 months. We have been training with the bokken for at least a year now alongside the three weapons we have already graded in. The last three months have been dedicated to just training with the bokken.
The syllabus focuses on drawing the bokken in different ways, the five basic cuts, the basic stances, four disarming techniques in seiza, wrist locks with the handle of the bokken, 5 muto dori techniques (disarming techniques) using jujitsu moves, an elaborate Reishiki (beginning) ceremony and demonstration of decorative cord (sageo) tying to the handle of the bokken.
Learning to use a bokken effectively definitely requires you to learn how to relax into a technique until the last second when you apply tension. Without this ability to relax you look like you're hacking someone to death rather than smoothly cutting them! It is a skill that transfers well to karate where the ability to alternate between soft and hard is also necessary to generate speed and power. This is no coincidence - many ideas and training practices used in karate come from several styles of sword. I previously wrote about this in Karate and the Sword .
Iai-jutsu not only has some overlap with karate it also has a lot of overlap with jujitsu, as you might expect. The sword is the weapon of the samurai and so is jujitsu. If a samurai was disarmed of his sword he would have to fight empty handed and so the art of jujitsu was developed. Samurai were particularly adept at Yoroi-kumi-uchi: Techniques for grappling in armour which required the combatants to use their hips and limbs in a particularly powerful fashion, allowing them to lock onto each other without actually grabbing the armour.

So my bokken training has taught me many things that are directly applicable to my karate training - I have learnt to move more fluidly and have learnt several jujitsu techniques that have improved my grappling skills in karate. I think that some selective cross-training like this is an excellent way of perfecting skills and body movements that transfer across different martial arts. Cross training can give you a new perspective on a similar technique learnt in your main art.

Another challenge of training with the bokken is learning how to move in a hakama! The first challenge is just getting the thing on and then learning how to get into and out of seiza without treading on it.....well, you can imagine the problems that presents!

Anyway, all is ready for the grading.

Here's a short video of  a Reishiki ceremony (beginning ceremony). The one we have to do is similar but about 3 times as long and requires quite a lot of standing up and kneeling down again!

This work is licensed under a Creative Commons Attribution-Noncommercial-Share Alike 2.0 UK: England & Wales License.
Posted by Sue C at 16:05

Hi, SueC: I hear "time in grade" references; I hear "syllabus" and other such things that cause me concern as to what black belt means so would like to see you post on that subject,

"What black belt means to me?"

I admire you for being able to do two systems at once! I tried our weapons class, but the stances were just different enough that it really confused me, and I thought at this stage it was a bad idea to keep going. When I find things more intuitive on the Karate side I might give it another shot.

Do you train any grappling arts, or just Karate and and weapons right now?

SCB, Hi, thanks for commenting. I know the concept of multiple gradings and wearing coloured belts is a contentious issue for some clubs and to some extent I can understand that point of view. However, I do have a lot to say on the subject so I will accept your challenge! Give me a week or so to put a post together and I'll tell you what I think :-)

Etali, sometimes I think I'm bonkers trying to train in two arts simultaneously but at the same time I am gaining a lot of benefit from doing so. The kobudo training I do is part of a jujitsu club. I don't formally train in jujitsu - I tend to learn it on a 'need to know' basis because some of the weapons training requires me to do some jujitsu throws. I actually wrote a post about the advantages/disadvantages of my cross training a few months ago, this is the link: http://kickasssuec.blogspot.com/2010/06/is-cross-training-good-thing.html

Gradings are a double edged sword for me (no weapons systems puns intended). I like them and I hate them.

I enjoy working towards a goal. I'm on the fence about how I feel about belts. In many ways I disagree with the belt system, but at the same time, I want my next belt or rank.

Gradings can present interesting challenges for me. Grading time always comes along with brushing up on all the 'other stuff' that I don't give too much thought to most of the time. With any established style or system, there are those things that are more for show. The katas, while containing excellent bunkai, have some purely for show elements. Every time there is a grading, it's time to go back and brush up on that sort of thing.

Happily, or sadly, depending on your perspective, gradings are fairly rare with my Sensei. He has left all the business or running a martial arts behind and we are held to an extremely high standard.

Grading in different styles would be really challenging, especially if they differ quite a bit. I had some trouble with the stances in Kali/Escrima while cross training. Often I seemed to be standing wrong no matter which class I was at.

Cross training in a less formalized sense has helped me with this, sort of learning like you said on a need to know basis.

Good luck with your upcoming grading(s). It must be challenging.

Hope it went well Sue. I can't wait to here all about it.

Posted a comment on your grading result blog. Now I understand that the sword grading is not part of your karate. Foolish me. I do agree that sword work has a great deal to offer.