The joy of bo! 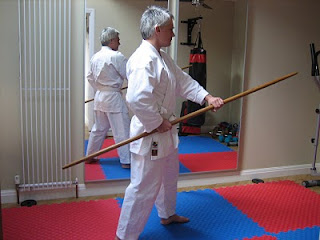 Isn't the bo great! I've had 3 lessons with it so far and I'm loving it. I steered away from training with the bo initially because it didn't seem a very interesting or inspiring weapon - it's just a long stick. It also seemed rather unwieldy and difficult to handle.

Then during my recent kobudo grading session, I had to partner my husband in his jo grading (he partnered me for my tonfa grading) and I was asked by the grading officer to fetch a bo! I had never held a bo in my life before. Not owning a bo, and not knowing what to do with it anyway, I was despatched to find my instructor and ask to borrow one. Anyway the grading officer was very patient and showed me how to hold it and strike with it. I was hooked! I found the bo reasonably intuitive to use and move with and decided during my husband's grading that it was going to be my next weapon. By the way, my husband passed his jo grading with honours in spite of me!

So my training with the bo has begun. So far, I have learnt to 'bo walk', demonstrating elbow, head, overhead and groin strikes as I move forward. Then we've done something that resembles 'sanbon kumite' in karate where one partner steps forwards doing a particular strike as the other partner steps backwards, blocking the strike. After 4 strikes you swap roles to arrive back at your original starting point. Then you repeat the process with each type of strike/block. Great fun!

I thought I was going to get a lot less bruises with the bo than I did with the tonfa with it being a long range weapon, then last night I was learning to manipulate the bo (spin it). Watching someone spin the bo looks very impressive and difficult so I was surprised that I picked it up so readily. However, like most people learning the bo for the first time, I managed to hit my own head with it a couple of times and my shin - so perhaps I will get as many bruises as I did with the tonfa, just in different places!
Now that I'm getting used to handling the bo I've come to realise that it is in fact a very versatile weapon and not just an uninspiring stick. The basic premise of the bo is to increase the force delivered in a strike through leverage. It can be used to strike an opponent's eyes, throat, solar plexus or groin. You can use it to block an attack, apply joint locks and to sweep an opponent off their feet - all without having to get in too close.

I had always thought of the bo as being an Okinawan/Japanese weapon used in some styles of karate training. I hadn't appreciated that it is also used extensively in a range of other martial arts, including jujitsu and virtually every civilisation in the world has used a long stick as a self-defence weapon. Historically in Okinawa during the feudal period when all weapons were banned, the bo is thought to have originated from a farm implement used to carry two containers of rice or water on either side of the shoulders or from a pole used to 'punt' boats across the paddy fields.

There is something very tactile about the bo. Its thickness makes it easy and comfortable to grip and its smoothness allows it to glide effortlessly through the hands. It feels perfectly balanced when held in the middle and its weight is light enough to manipulate and swing easily but heavy enough to generate some power. The only downside is that I'm acutely aware that I have triceps muscles today and my neck and shoulders ache!

Here's a short tutorial of how to spin the bo:

This work is licensed under a Creative Commons Attribution-Noncommercial-Share Alike 2.0 UK: England & Wales License.
Posted by Sue C at 12:36

Yeah the bo is a great weapon to use and manipulate isn't it! I find you get great feedback from a bo (bong in Korean!) whereas using tonfa is solid but less immediate (for me).

You make a good point about the staff being used in many cultures-I'm sure for many less wealthy individuals it was an affordable weapon as well as a useful walking stick/carrying aid/tent pole/...!

English history tells of the Quarterstaff:

Although I haven't hit myself in the head (yet, LOL), shin whacks were a problem for me at first, too. Shin guards are bruise/"egg" savers for sure...

Hi Chris, interesting video. Those quarterstaffs look a lot thicker than a Japanese bo and lack the tapered ends - to be honest they looked a bit rough and not nearly as tactile to hold! I noticed they also hold the staff more symetrically whereas I'm being taught to keep my hands much more towards one end and to slide the bo through my hands as I turn it around. Interesting to see but I think I'll stick with my bo and leave the quarterstaff to Robin Hood and his merry men (since they don't seem to want to train women). Thanks for sending me the link :-)

Hi Felicia - I think I'm going to need a crash helmet as well as shin pads!

As a kobudo practitioner it warms my heart to see you diving into the bo! The bo was Seikichi Odo Sensei's favorite weapon, and it certainly is devastating in the right hands.

Although you should do whatever your Sensei asks, if you have the option, don't indulge in the bo spinning stuff. As someone who engages in kobudo kumite frequently, I can tell you it has no real application. Weapons fighting happens far too fast and requires exacting control of centerline - spinning techniques are simply too lengthy and committed to be practical.

Hi Matt. I agree the spinning stuff can be a bit 'style over substance' but I presume it's a way of getting you used to handling and turning the bo and keeping it balanced. I know the syllabus will soon move onto strikes, locks and sweeps which I expect will be more practical. The spinning's fun though!

It seems fairly odd to ask someone as a partner in an examination who has never even held the weapon before. Odd, and potentially dangerous. Usually partners actually practice together first and both are supposed to have enough experience and control to attack and defend at a realistic speed and intensity. A bo is not a little kid’s toy and can actually kill when swung at full speed against vital targets such as the temple or throat. A good uke really makes or breaks a grading. I've seen people knocked out because they failed to deliver the right attack or their partner lacked control and misjudged the distance, glad no-one got hurt here.

Hi Anonymous. Yes it was a bit odd but don't worry it was only a slight problem at the beginning of the grading when my husband had to demonstrate some blocks with the jo. We had practised this with me delivering empty hand strikes (that was the odd bit)rather than strikes with another stick. I just had to deliver him a few strikes with the bo (slowly - its only a level 1 grading)so he could block them (gently - it's just a demonstration of an elementary technique). For the rest of the grading I didn't need to use a weapon as uke because my husband just had to demonstrate a series of locks and throws on me using the jo. Definitely no injuries and it really wasn't a big problem at the level we were grading.