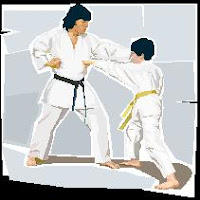 This work is licensed under a Creative Commons Attribution-Noncommercial-Share Alike 2.0 UK: England & Wales License.
Posted by Sue C at 13:23

This is a really interesting subject for me Sue - as I've progressed through the ranks, I've been getting asked more and more often to lead small groups of students through katas and other testing material. Working with the adults is pretty easy - they can stay on task. But with the little ones it can be a real challenge. I've found that making games out of "who can do the best zenkutsu dachi all the way through the kata" or "who can kiaii the best" helps a lot.

I like that you came up with some pre-arranged drills to be used just in case - I'm going to do that too! Thanks for the idea :-)

Hats off to you! I don't know if I'd have the patience to work with kids that small. Sounds like you did a really nice and creative job with it. :-)

I like rolling with kids to pad my win/loss record. :)

Seriously, though, I haven't been involved with the kids classes very much. We do get to spar with them occassionally, which is fun. They're crazy.

Hi Sandman, you definitely have to try and think creatively with the kids so that they don't get bored!

Some books I've found useful for ideas are:
101 games and drills for martial arts by David and Elizabeth Lee. Published by AMAC

I got them all from Amazon.

Frank, I'm sure you could do it, you just have to get into the right mind set that's all.

Steve, kids are definitely crazy sparrers, especially when several take you on at once - they're so merciless!

Sounds like a great class Sue. I'm sure my DD would love those drills. She's only 6 and sometimes finds kihon drills hard because she's easily distracted. I might try those tricks to work on her stances a little. She needs to improve them for her kata.

LOL @ Steve's comment about sparring with the little ones. Crazy is the right word! My right forearm is still sporting a lovely bruise from sparring with an over eager 8 year old on Sunday! Little tinker!

Well, there is that distinct advantage: Little kids are pretty easy to kick in the face.

Hi Marie, I find the kids very variable in their ability to retain new information. One week they've got it, the next its as if you never showed them in the first place! Making it varied and fun seems to be the key.

Frank,.... and adults are pretty easy to kick in the shins - be warned! lol.

Seriously: With kids, it seems that repetition, and approaching the same solution from many different angles, is what really seems to work.

Actually, that works pretty good with adults, too. I've been helping my daughter with her blocks, straightening her punches, and helping her with her kata.

With kata, I ask her what she thinks the bunkai is for each move, as we do them in sequence, and then I show her some of the things that might actually occur, and she seems to "get it."

Later, if she looks like she's hesitating in one of the moves, I'll say, "What are you going to do if your opponent throws a kick/punch/overhand strike? It jogs her memory, and because she's the one doing the actual recall, and seeing it play in her mind's eye, by winning it for herself, she gets to keep it. Of course, my daughter is 12 years old, so her attention-span is a little better, and she's a little more focused than when she was a few years younger.

With real little kids, if you can make a game of things and make it a form of play, they'll pick it up faster. This is how Indian children would grow up to be warriors in the tribe. The games would involve bows and arrows, wrestling matches, throwing small spears, running races, leaping, tumbling, etc.

Kids now, are so over-scheduled, and bombarded with information on all sides.. I feel sorry for them. I know that my daughter, by the end of an 8-hour school day, and then two hours of homework, she's frazzled. Especially since (at least in American schools), they aren't letting the kids go out and play, everyday. Gym class is very nearly a thing of the ancient past, unless they have it once or twice a week...

By the time kids get to class, they're all but pinging off the walls, and they really can't help it. Kids naturally have a LOT of Ki/Chi, and they have decreasing outlets to really get it all out so that they can be properly balanced.

Good luck... I think it takes a very special person to work with small children. It takes a special sort of patience, humor, and kindness.

Hi Frank, if your daughter is getting to see bunkai applications in her kata already then she is doing REALLY WELL! She's lucky to have a dad that can help her.

Thanks! I'm showing her little things, just one at a time. The reason for this downblock, that middle block, this overhead sweep, etc. I'm trying to help it be more "real" to her. And of course, we teach best that which we most need to learn, so it's symbiotic. ;-)

Hi, Sue...I think Frank hit it right on the head - repetition and kinda covering the same thing from different angles works well. Whoever said that children lean by play was spot on. Games/challenges are great for that age group, but their attention spans are short and you have to switch up frequently so they don't get fidgetty/board. Sneak that learning in through the back door, so to speak...

Hi Felicia, I had it under control this week - that doesn't guarantee I will next week. LOL. Do you spend much time teaching young children in your dojo?

Some great ideas. Especially like the use of the karate belt for teaching punching and chambering concepts.

Hi Sensei, I find that belts are a versatile and useful tool!

In my opinion you will find the best martial artists and the most knowledgeable ones are often the ones who teach children as you have to analyse and break down everything you say and teach in so many different ways so they understand.
You will probably find that you will learn more from them about your karate than they will learn from you!


kids learn fast, really fast and the more fun you make it the quicker they pick it up.
like anything first establish a few general rules of the game and its easy.
Rule 1 the hand thats not doing anything (hikite) lives on your ribs. thats where it lives so if your not using it it goes home.
(its always working but not yet for little people)
Rule 2. compare everything to something else. eg age uke 2 watches tell the time above your head.
rule 3 keep them busy and that way they dont get out of hand or fidgity. eg whn punching have them kiai on number 5. not that easy to count, punch and remember to kiai.
rule 4. make it fun
rule 5. its always good but can be improved. confidence and praise is fantastic motivator.

incorpoate team games eg. a race with karate techniques.
the line game is a good one. get them to line up grade order and have the person in the high grade position winning if anyones technique is slightly off move them to the low grade end of the line and everyone moves up. Just be careful to get all of the 'out' at some point so all of them have a go at being the king of the line. Whats great with this is its fun and you can be more strict with more abled students and they all love moving up the line.

Hi Fishface, I agree that it's probably sufficient at this level to just get them to remember to put the hikite arm on the hip and not worry to much about 'using' it. I think I confused them a little trying to get them to coordinate its movement with the gedan barai block.

Your ideas for games/drills sound interesting - I'll try something like this next time with them. Thanks for your comments.