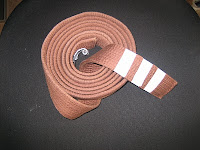 Before I tell you how my grading went on Saturday, I just want to make clear that I was grading for 1st kyu NOT 1st dan! My black belt grading is another 9 months away yet. 1st kyu is the highest kyu grade and in our system this means my brown belt now has 3 white tabs on it (we have 3 separate brown belt gradings spread over about 18 months - with each one you get an extra tab).
With that cleared up I'll tell you how it went!
The grading was well organised and started on time at 3.30pm. There were nine of us to grade, 4 people grading for 3rd kyu, one grading for 2nd kyu and 4 of us grading for 1st kyu. As is usual in our grading model we alternated sections between the different kyu grades, standing at the back when it wasn't our turn. This worked very efficiently as we only waited at the back for a few minutes at the time. The 1st kyu syllabus was by far longer than the other grades so unfortunately they did wait around a little longer than us.
After a brief warm up, we started off with punching and kicking combinations (6 of each) which we repeated several times each - we were definitely warmed up after that! These seemed to go okay, well I remembered them all anyway! This was followed by demonstrations of our 2 kata and a bunkai application for each. We performed the kata individually.
Kata is my weak point! Though I performed all the steps correctly, tried hard to get the timing right and remembered to look and prep my arms/feet before turning, I am still not sharp enough, repeatedly forget to snap back my kicks properly and I'm still a little wobbly sometimes. Though I have not had the full feed back or the individual marks for each section from my instructor, he did tell me that my kata performances let me down and is the area that needs most work.
The standard is set very high for kata performance in our organisation. It is an organisation that has produced or is preparing people for World and European level competition. Though we are not all expected to reach this high competition standard, by setting the bar high, we more average karateka will at least be pushed to reach the highest standard possible for us as individuals - and I still have 9 months to get this right!
We then moved onto pad work and demonstrated 3 different punches and 3 different kicks against the pad. This went well, I'm fairly strong on pad work, I like beating the living daylights out of a pad, so I'm hopeful of a reasonable mark on this section.
Next we moved onto the partner work - the ippon kumite, goshin waza and ne waza techniques. I was able to partner my husband for this and I think we both gave a pretty strong performance in these sections, particularly my husband. My son was also very strong in the partner work. He's only 16 and very slim and light but he has lightening speed and whipped his partner around like a rag doll! Glad I wasn't on the receiving end of that!
The final section was the sparring - we each did 2 rounds of shiai kumite (competition sparring). I did my first round with a young lad of about 12 who was grading for 3rd kyu. Though he wasn't much smaller than me, he was still a lad (and not very confident with himself) so I didn't feel I could go too heavily with him. Having said that, he did show a reasonable range of techniques - just not assertively enough to score. My second round was with my son, and he showed his mum no mercy! In fact, our instructor had to remind us it was light sparring only. I think we scored 1 point each, and gained a few bruises!
Then it was time to line up to receive our marks. Usually we get the breakdown of each section as well as the overall mark but there was only time to get the overall mark ( the grading had taken 2 hours). Prior to giving the marks he warned us that the 1st kyu's had been graded to black belt standard (which is tough) and to expect that our marks would be lower than we are accustomed to. I scored 60/100, my husband 63 and my son 62. We generally score in the region of 68 - 75 so I'm glad Sensei warned us!
I averaged 6 marks per section. If I do this in the black belt grading I would score 90 marks (there are 15 sections). The pass mark at black belt is 90! I would scrape a pass. Obviously I don't want to scrape a pass, I want to pass well so I will need to use these next 9 months to train really hard and make sure I improve my standard.
I think the 3rd kyu's were slightly in awe watching us 1st kyus perform some of our ippon kumite and goshin waza techniques. The differential in standard between 1st kyu and 3rd kyu is quite high, in the same way that the differential in standard between 1st kyu and 1st dan is quite high. I think we all finished the grading satisfied that we'd given it our best on the day, but with no doubts that improvements are needed for our black belt grading next May!

This work is licensed under a Creative Commons Attribution-Noncommercial-Share Alike 2.0 UK: England & Wales License.
Posted by Sue C at 12:34

CONGRATULATIONS!! :) Well done to all of you.

Reading this "I like beating the living daylights out of a pad" made me laugh as I've literally just posted a blog post with that same sentiment in there! Spooky.

9 months out from your black belt grading? That's scary! I'm certain you have the dedication to make it though. You give me hope that one day I might make it to where you are! Proof that us martial arts Mum's can do it if we put our minds to it.

Grats again on the grading.

Congratulations you to all.

Congratulations and very best wishes for your black belt preparations

Thank you everyone for your good wishes....so the journey continues!

Well done Sue! Looking forward to following your training for the next 9 months :-)

Way to go, Sue!! And now that you are officially a Shodan candidate, congratulations :-)

Funny - my son is also 16, light, fast and the same rank as me. We don't spar each other often in the dojo (our sensei realizes that we train together away from the dojo and need other folks to work techniques with so he rarely pairs us together, thank goodness!), but when we do, I try my best to go as hard on him as I do my training partner, Ed, who just turned 48 (the three of us tested for shodan together). My son is much more of a defensive fighter than I am (I'm a lot more aggressive), so I try hard to "take it to him" so he gets used to reacting and countering quicker because he knows I'm fighting him like I fight everyone else - and he has to do the same. It's all good though - because we learn a lot from each other!

Only a martial arts mom would understand that, though! Imagine how weird that would sound at the PTA table?!? Gheesh...

Thanks Felicia, I don't often partner my son in the dojo either. In fact I'm slightly in awe of him because he a lot taller than me and has a long reach which makes it hard for me to get near him. He clearly thinks I'm fair game as well. I try not to let him get away with too much though!