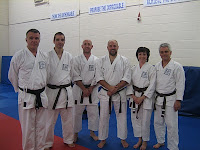 I attended an Iain Abernethy  seminar yesterday - what a treat! He's an excellent teacher and an amazing karateka to watch. The course was held at the SKK Judo Centre in Newton -le-Willows, near Manchester.
This is a brilliant place to hold a seminar because the mats are so soft (it's like walking on the moon!)

Holding the rank of 5th dan, Iain Abernethy is a leading exponent on applied karate in the UK and gives seminars all around the world. He has also written several books,  produced several DVDs and produces the online 'Jissen' martial arts magazine. He's also a really nice, approachable guy. 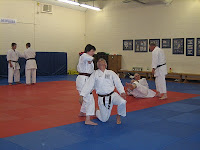 During the seminar we were looking at several different bunkai applications from the pinan katas. This included the proper use of shuto uchi, the need to use the correct stances as they appear in the kata, the application of arm locks and counters to those arm locks, take downs, escapes from grabs and various other locks. We also did some interesting exercises with our eyes shut to demonstrate how proprioception works.

We then finished off with some grappling and ground work skills, though this was more for fun than for serious self-defence. 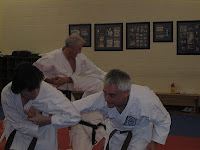 He interspersed each drill with a discussion on the principles held within the kata as well as some useful historical context and some amusing anecdotes about the old masters in karate. The historical context was particularly interesting as he explained the reason why pinan shodan should precede pinan nidan (in most systems pinan shodan is generally taught as the second kata rather than the first as its name suggests). Though pinan nidan is technically easier to perform than pinan shodan, the bunkai applications are more complex than those for pinan shodan - that is why Itosu put it second. The pinan katas are ordered according the difficulty of their applications rather than their performance. 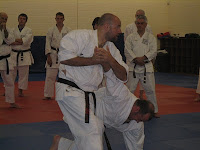 The things I most remember Sensei Abernethy saying are (slightly paraphrased):

I think he was actually quoting someone else as having said this but I can't remember who! Because of this he said you must train in the way you would want to respond in a real fight, so, never help your partner up in training after you have thrown them - you may find yourself helping up your attacker instead of running away! Always assume there is more than one attacker around so don't spend time holding people in locks - the second guy may get you if you do. Once you've thrown someone down or struck them down, back away looking to your left and right (you'll have tunnel vision as a response to the adrenaline dump). You should do this in your training because it won't come naturally when you are in a real fight and you may not notice the second guy next to you. Also, he said attack the head repeatedly and try and control their head by grabbing the hair or holding them behind the head. He also talked about the effectiveness of the pre-emptive strike - if a threat looks imminent then don't wait to be attacked first or you will lose. 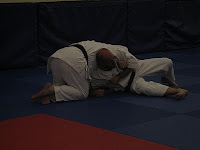 Overall the course was very beneficial, enjoyable and relevant to our syllabus. Hopefully our organisation will be booking Sensei Abernethy again next year. If you get the chance to go to one of his seminars don't miss it. 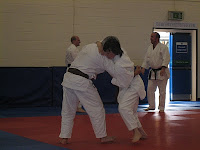 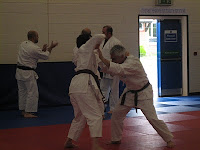 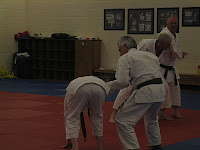 It was a fantastic seminar Sue.

I am a big fan of Iain Abernathy's stuff - I've never had the chance to go one of his seminars but I would in a heart beat if I had the opportunity. Great that you were able to go!

Wonderful! I've heard the quote about training before, both in the Army, and in police work. Sounds like it was a great seminar... Good stuff about prioperception and fighting the way that one trains.

Sounds amazing, Sue. Glad you got to experience it :-)

Hi Chris, I hope you're onto it, apparently he's booking up fast for 2011!

Thanks for your comments everyone, he was definitely good!

What a wonderful experience! Thank you for sharing in your post.

I've been listening to some of the podcast's from Ian's blog and they're excellent. Sounds like an amazing seminar....and it was literally around the corner from me!! I didn't realise there was an SKK judo centre in Newton.

Glad you enjoyed it.

Cat, Marie, On Iain Abernethy's website he has his seminar schedule for the year. They are all open seminars for any grade so you may be able to book onto one.

That's a great experience! I've been following Mr. Abernethy for awhile and even got involved with his Jissen Magazine. He is doing some great work.

Coincidently - many danzan ryu jujitsu programs also stress not to help up partners.

Hi Matt, it was definitely an experience not to be missed.