The karate organisation that my club belongs to, the SSK, held its first black belt grading session last Saturday. This was the first time that dan grade students have been tested against the new syllabus introduced last August. Our new syllabus is much more comprehensive than before and includes kihon combinations, kata and bunkai oyo, ippon kumite, pad work, goshin waza, break falling, ground techniques and sparring.

The ten students that graded (four for 1st dan and six for 2nd dan) had to cope with the hottest temperature of the year so far at 28 degrees! The grading started with a 1 hour course at 10.00am and then progressed to a 6 hour non-stop grading - pretty gruelling hey! Obviously they were allowed to take frequent short breaks to re-hydrate and fuel up with some calories but several of the student's declared it to be the hardest thing they had ever done! 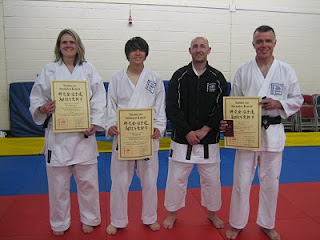 Three of the students were from my club: Katrin Seamer (my usual training buddy), Chris Chung and Dave Mair so I'd like to publicly congratulate them. All achieved their 1st dan. Here they are, photographed with my instructor, Sensei Steve Hegarty who acted as one of the three grading officers.

“True karate systems contain an understanding of self defence from realistic distance, groundwork, locks, chokes, strangles, restrains, pressure points, power generation techniques and balance points; all these are explained through the use of kata (the heart of karate-do) and its analysis - bunkai. Saturday’s dan Grading was a pleasure to watch as all candidates showed an understanding of true karate-do. All of the above ideas were applied by all candidates. Although it was a long day all 10 candidates passed showing good fitness levels. All candidates can walk away from the grading with a big smile sure in the knowledge that they thoroughly earned their respected belts. Congratulations!!!”

It'll be my turn this time next year - gulp!!

This work is licensed under a Creative Commons Attribution-Noncommercial-Share Alike 2.0 UK: England & Wales License.
Posted by Sue C at 11:58

Congrats to your dojo mates, Sue! And brace yourself - that year will fly by :-)

Congratulations to all! You're going to do great, Sue! Ganbatte!! OSU!!!

Hi, nice blog & good post. You have beautifully maintained it, you must try this website which really helps to increase your traffic. hope u have a wonderful day & awaiting for more new post. Keep Blogging!