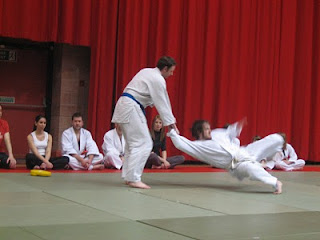 I made it to the martial arts festival I have been advertising in my sidebar for the last few weeks. It was a great success – better than last year even!

After getting up at 6.30am (ooh! bit early for a Saturday that) we were on the road just after 8.00am to drive the 140 miles to Sunderland. We arrived just as the introductory Lion Dance was finishing which was a shame as I enjoyed watching that last year.
The line up was great though, everything from aikido to capoeira to karate, kobudo, taekwondo, jujitsu, taiji , kung Fu and kickboxing. 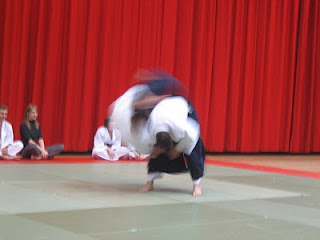 The things I particularly enjoy about this festival is the fact that it isn't just about presenting professional performance displays with flashy sound and lighting. Impressive as these type of demonstrations are they don't necessarily represent martial arts as you and I know it. Instead this festival showcases many local or national clubs (the sort you and I attend), giving them a chance to show the public what real martial arts clubs are about.
Most of the clubs didn't, therefore, just handpick their 'stars' to do the demonstrations but allowed members of all ranks and ages to participate. The taekwondo club had members ranging from 5 years to 90 years performing in their demonstration. What impressed me most was the fact that this 90 year old black belt could kneel down in seiza on the mats and get up without having to rub his knees! A feat some middle-age martial artists have a problem with.

The kids are always great to watch. Some clearly have a lot of natural talent and enthusiasm and you can see that if they keep up their training they will one day make excellent martial artists. Others are just not with the program at all but never the less add the 'arrr' factor!
Of course one also wants to witness some impressive, advanced martial arts as well and there were some impressive high ranking artists performing as well. 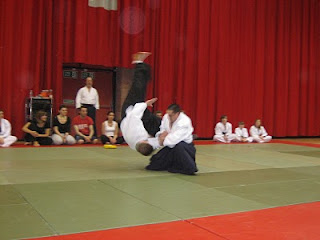 The other thing that I like about this festival is the friendly, welcoming atmosphere. The instructors and members of the various clubs as well as the organisers were willing to stay around to chat and show you things. Several of them put on mini seminars that you could join in. I learned a few defences against knife attacks from the senior instructor with DFM martial arts. I'd have like to join in a few more of these 'taster sessions' but I was too busy talking to people or watching the demonstrations!
Of course the main motivation behind organising this festival every year is to raise money for Cancer Research UK, so there are raffles and auctions and various other side shows to help swell the coffers. Hopefully they raised money by the bucketful.
Anyway, here's some videos of some of the highlights of the festival:

This work is licensed under a Creative Commons Attribution-Noncommercial-Share Alike 2.0 UK: England & Wales License.
Posted by Sue C at 14:53

Hi Sue: Nice event. Thank you for sharing the videos.

Ninety years old and no knee rubbing...good for him! I am impressed and even a little bit jealous. :)

Looks like a good time was had by all. And all for a good cause. Thanks for sharing the videos :-)

There were "capoeiristas" (fighter of Capoeira) too? Great! I did not know there was Capoeira in your country!

I studied Capoeira when I was young.

Michele and Felicia, thanks for your comments, glad you enjoyed the videos.

Guilherme, Capoeira is always fascinating to watch - seems to require great flexibility. Unfortunately I don't really get it as a martial art, it seems a little bit too dance like to me!

Sandman, One thing about living in a small country like the UK is that nothing is very far away! I live fairly centrally in England so nowhere is more than about 200 miles away in any direction.

Oh, I think so. But it can be mortal too, indeed it was mortal when the slaves use it to fight against the "capitão do mato" (captain of the woods) at the time of slavery.

Capoeira was forbidden until 1930 because it was very violent and aggressive. So the black people used it like a dance to passed unnoticed.

I've been meeting good fighters of Capoeira... but, of course, I don't think Capoeira is as so efficient as Karate or Jiu Jitsu.

Guilherme, I'm sure you must be right or else it wouldn't have persisted as a fighting art all this time.

What I don't understand about it is that it seems to go against all the principles of good fighting. For example, in the demonstrations I have seen they seem to spend a lot of time upsidedown! This doesn't seem a very sensible strategy - how can you keep abreast of what's going on in a fight from down there? And how do you defend your head from being kicked?

Of course this is probably just my ignorance talking, I've only seen it demonstrated twice plus a clip on YouTube which ended in a rather nasty fight! :-)