Do you speak 'Kata'? 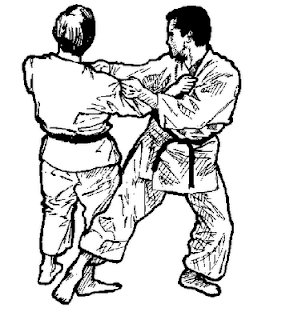 So far I have only learnt bunkai through a process of rote learning. It usually goes like this: we take a segment of kata, Sensei shows us an application for that segment of kata (sometimes two or three applications), we practice them on each other and then we may move onto another section of the kata and repeat the process. This is not an unreasonable way to learn some bunkai, particularly in the lower kyu grades, but I don't think I will ever learn to interpret a kata myself by this method.

In the higher kyu grades we have been encouraged to explore the bunkai for ourselves, to try and work out some possible applications and test them out on each other. I have found this process extremely difficult and I have finally realised why this is...

To read a kata you have to be able to speak its language. I don't mean a language like English or Japanese, I mean a non-verbal language - a system of principles and rules that are tied up in the kata along with the techniques. Rules and principles that tell you how to interpret the movements in the kata.

For example, one rule states that if you are moving forwards whilst doing a technique, say an age uke block, it should be interpreted as an offensive move, but if you are stepping backwards whilst blocking then it should be interpreted as a defensive move. So an 'offensive age uke' might be an upward rising strike with the forearm to the opponents jaw, whereas a 'defensive age uke' might be stepping back to receive and deflect an incoming punch.

A common move in many kata, particularly the pinan katas, is to step through with an oi zuki. Punches performed in kata have perplexed me for a while, for this reason: when we punch in a kata we always leave the arm out, particularly if the punch is at the end of a combination. However, in kihon practice, whether punching the air or punching a pad, we always pull the punching arm back. So why don't we do this is kata?

Well, I had a little eureka moment last night in class on this one. Sensei was demonstrating an unbalancing technique to us which involved the left hand grabbing the opponents right elbow and pulling back whilst simultaneously stepping through, grabbing the opponents left shoulder with the right hand and pushing forwards. The pull/push movement causes the opponent to rotate and unbalance. However, the pulling back with the left arm whilst stepping through and thrusting forwards with the right arm used exactly the same principle of movement as an oi zuki punch.

Eureka! I suddenly realised that punches are not retracted in kata because they are not necessarily to be interpreted as punches - they could be pushes or grabs. If the punch was pulled back in a kata then it might only be interpreted as a punch. I can think of a few examples in kata where double punches are performed and these are pulled back (but they are clearly intended to be punches) but I can't think of any examples of single punches that are immediately retracted. I felt that I had learnt a few new words in the kata language last night (even though I didn't do any kata!).

There are many rules like this that help us to understand how to read the kata. Others include, 'a hand returning to chamber usually has something in it' and 'touching your own body means touching your opponent' e.g. doing an elbow strike into the palm of your own hand implies that your opponents head or torso is sandwiched between them.

I have come to realise that kata are not merely a repository of techniques but also contain the rules and principles we need to know to interpret those techniques. Kata come with an integral instruction manual!

I feel pretty confident now that if I learn to speak 'kata' I will be able to decipher the meaning of individual kata myself.

Do you speak 'kata'? Are there any 'rules' you know that can help me understand kata?

Clip Art above courtesy of: http://www.cksinfo.com

This work is licensed under a Creative Commons Attribution-Noncommercial-Share Alike 2.0 UK: England & Wales License.
Posted by Sue C at 16:50

Another stimulating post, thank you. I enjoy wandering through your brilliant collection of posts/essays/articles but get lost, or at least too far from the post I intended to comment on SO I will comment now, wander later!

I empathise with where you are, I think. I too have been stopped now and again in kata practise to go through bunkai, and got to the stage where I could recognise similar applications in different kata. I've read a little too (really like Iain Abernethy's Bunkai book) but it's only recently that I've started to quietly try to understand why certain things happen in certain kata, or to ask how that move works....

If I were a traveler in Kataland I'd be able to say hello, not quite ready yet to ask for a coffee and the bill!

I've learn that no part of a kata is superfluous, so even bringing the hands together to bow has an application. That a change in direction does not always indicate a new attacker, that it is more likely to show angle of attack (the theory I get, the applications in kata ... not yet).

I'm looking forward to at least understanding the grammar of 'kata' and to maybe, one day in my nineties, to be able to chat a little : )

I don't speak kata, but the following may be of interest:

I've read that a jump in kata often means a throw & was told that most stances are transitory, are usually too deep compared to the origins and that kicks were mostly gedan (below waist height) - the last two points (deep stances and high kicks) were late aesthetics modifications.

Hi Cat, thanks for your comments - that angle of attack thing is important (if not a little confusing to interpret sometimes!). Perhaps one day we will be able to converse in 'kata'!
BTY Kane and Wilder's book on The Way of Kata is quite good as well.

Fred, there is a jump in pinan godan that someone told me could be a throw! I agree with you on the kick thing - definitely gedan. Apparently all punches are to the head, even if they are depicted as chudan punches in the kata, it just means that in the preceding move you must have brought your opponents head down to chudan level to punch it!

The chudan punches in kata are aimed at the head since the opponent is pulled forward and downward into the blow (chudan level). This is why the arm is always retracted to the hip: it represents grabbing and pulling the opponent's arm (hikite), making him lurch forward into the strike and limiting his means of defense.

Blocking with two hands (especially when one is held at head level) usually means a shoulder throw, what they call ippon seio nage in jiu-jitsu. The pulling is done to off-balance and lift him up while you drop your weight below his and flip him over.

Deep stances are quite historically correct, although they were mostly used in close-in fighting where you could be thrown or pulled off-balance easily. In that context it makes sense to keep your weight low to protect your balance, similar to the way wrestlers move.

I don't see how a jump could possibly be construed as a throw (in order to throw someone you generally have to be grounded yourself) but maybe that's just me. An explanation would be most welcome.

I also believe that some of the deep stances have an application other than just rooting yourself to the ground. For example, shiko dachi (horse stance), when done very close to the attacker and immediately behind their knee, acts to unbalance them and if you stike across the chest at the same time -over they go!

Though I have heard that a jump can be a throw I personally don't get it either - so I can't offer you an explanation!

Jumping requires a quick action a forceful burt of energy to lift all of your weight of the floor.
as in kata it is not a great idea to be in the air we can assume this mapping out of kata can be interpretted as your opponent being airbound.

in the pinan mentioned look at the set position before the jump and you will find its similarity to the shoulder throw mentioned earlir. also look at the techniques position after the jump this can equally be a arm lock applied to the grounded opponent.
lots of theories on kata but the intricacies of the technique you are performing is not always the position you should take but what happens to or where to strike your opponent.
hope this helps.

Hi fishface, so are you saying that the jump in pinan godan represents the opponent being airbourne in the middle of a throw?

I agree that we need to look at what happens just before and just after a technique in the kata to get a full picture. This kata interpretation is real mind boggling stuff! Good job I like an intellectual challenge :-)

1. never return your hand to your body with out something in it.

2. Many turns in your Kata can be interpreted as throws.

3. You don't always have to break the neck. Not every application needs to be a technique designed to ruthlessly kill your opponent.

4. When in doubt consult other versions of the same Kata or search out it's Kung Fu counterparts.

5. Do not refer to old Shotokan Bunkai. I love and teach Shotokan but most of the Bunkai from the 70's and 80's are crazy.

I hope that helps you on your way

kai-ru, Hi, thank you for your input, some good advice here, very helpful.