A seminar with Patrick McCarthy Hanshi

What a week! It's been so busy I haven't had time to blog. However, the highlight of the week has been attending a seminar by Patrick McCarthy Hanshi. The seminar was hosted by Sensei John Burke at his dojo in Newton Abbot, Devon.

Patrick McCarthy is a highly experienced martial artist who has made it his life work to study the real applications of karate kata and develop a method of training that allows all karate-ka to take their karate back to its original intention as a fighting art by looking not just at realistic defence but also realistic attack. He has travelled widely throughout Japan and East Asia, studying with many eminent senseis and training across a variety of  martial arts styles. From his extensive field research he has developed the theory of Habitual Acts of Physical Violence (HAPV) and developed his two man kata application drills, which focus on pragmatic defensive practices. Sensei McCarthy is the founder of the International Ryukyu Karate-jutsu Research Society (IRKRS)  Click here for more information about Patrick McCarthy. 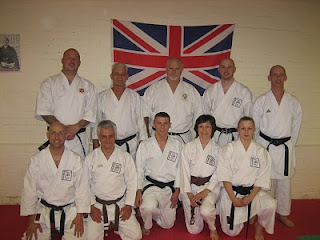 Nine of us from the SSK set off early on Tuesday morning to travel the 250 miles to Devon. The seminar didn't start until 6pm but being a bunch of keenies we arrived at lunch time! At least this gave us plenty of time to check into our Guest House and relax a bit after the journey.

We still managed to arrive at the dojo an hour early but were allowed to register and get changed. Sensei McCarthy arrived in the dojo about 5.30pm and before changing into his gi made a point of introducing himself to the various groups of people who were now congregating in the dojo, shaking every ones hand and asking our names. He chatted very informally with us all and we were all impressed with his friendliness and approachability. This informality generally set the tone for the rest of the seminar.

Once Sensei McCarthy was changed we lined up for a bow and then sat around him whilst he introduced the purpose of the seminar and provided a bit of background about the 2 man flow drill we were about to learn and just generally provided some context for the practical aspect of the seminar.

Next we got on with a fairly unusual warm up which involved working with a partner to stretch each other in ways you didn't know you could be stretched! It turned out to be a rather fun but effective way to warm up and left your body feeling ready to get on with some work.

We then got on to the real business of the day - the 2 man flow drills known as Tegumi (Te = hands, gumi = unite, cooperate and grapple). The principle behind this method of training is that it incorporates the reenactment of realistic attacks, i.e. chokes, grabs, bear hugs, etc., and a corresponding defense from both a standing position, called tachi-waza, and from the ground, called ne-waza with partners alternating roles between active and passive, attacker and defender ( we only did the standing techniques). By learning these drills, the meanings and principles of the movements and postures found within kata are revealed.

The drill that we did was taught to us technique by technique. It started simply with some soft blocking, gentle pushing and trapping and then flowed into striking, grappling, bear hugs, locks, slaps - you name it, we had it. The whole point though was that the drill was performed in a continuous flowing motion within a realistic fighting distance - i.e. close up. The attacks were meant to represent the range of realistic attacks that have been documented in real fights and the defences were applications from a range of kata. I certainly recognised many of the defensive moves as being techniques I have seen in kata.

In the 2 hours we had to practice the drill we probably strung together about 30 moves but clearly these drills can be much longer than that. I have to admit that learning the drill became very mentally taxing towards the end - requiring a lot of concentration. I started to get a bit befuddled by the last couple of techniques added to the drill, partly because they were quite complicated and partly because by 9pm I was pretty tired after such a long day. Fortunately we managed to video a couple of our instructors performing the drill as a reference for when we got back to our dojo so hopefully I'll get the chance to do it again! 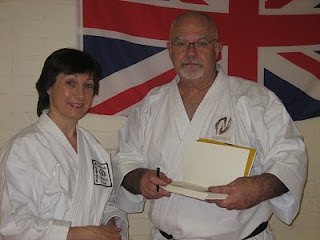 At the end of the seminar Sensei McCarthy very graciously stayed behind to be photographed, sign autographs and generally chat to people and answer questions - what a nice guy! Here's me getting my copy of the Bubishi signed by Sensei McCarthy:
If you get the chance to go to one of Patrick McCarthy's seminars - take it! You won't regret it.

This work is licensed under a Creative Commons Attribution-Noncommercial-Share Alike 2.0 UK: England & Wales License.
Posted by Sue C at 18:24

Great to hear that you found Patrick McCarthy's seminar useful, I've also heard many good things about his and would love to have attended this seminar.

I was fortunate to attend a Patrick Mccarthy seminar a few years ago. We worked flow drills and sai vs sai applications. My Shureido sai have never looked the same.

Unfortunately I don't know Patrick McCarthy, but seems to me very cool this seminary.

Hi Rig, pitty you missed it! He's in the UK until 10th June. A list of his seminars can be found at this link: http://www.theshotokanway.com/tswforum/phpBB2/viewtopic.php?f=16&t=1750&start=0

Hi Michele, he's back in the US in July/Aug - maybe you can get another chance to train with him!

Hi Guilherme, It was definitely cool!

A fortunate training session to be had!

Hi Matt, it certainly was!