SSK karate seminar - my first experience of a karate course. 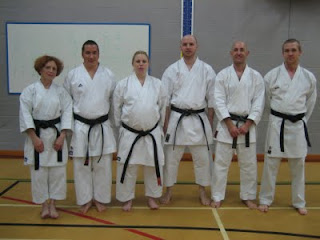 ( Photo: SSK course instructors)
I attended my first ever karate 'course' on Saturday. This was also the first course organised by our newly established karate association - Seishin-do Shukokai Karate. I didn't really know what to expect, I saw it as a chance to meet members from the other clubs in the association and receive instruction from other instructors.

Though it was an open grade event it attracted mainly black and brown belt students. There were 45 of us, which is the largest class I've ever been part of, with 6 instructors. I thought we'd be divided up into groups, each with an instructor, and then rotate between the groups but instead we did whole class teaching throughout the afternoon. This actually worked really well. One instructor would lead the teaching on the particular technique being worked on and whilst we were practicing it (with/without partner depending on what it was) the other instructors would wander around and advise us on our execution of the technique. This way we got quite a lot of personal attention from each of the instructors.
We covered a lot of the elements on the new syllabus including all the punching and kicking combinations, a detailed look at pinan nidan kata (not bunkai), some sparring, a locking kata and sanbon kumite with age uke blocks.
I was impressed by the standard of the students - it was very high. I suppose one should expect it to be high - about half the students there were black belts including 2nd dans, it would have been disappointing if it wasn't high! There is always something motivating about working with more senior people - it made me try hard, I didn't want to be the person that might let my club down. It was interesting partnering people from other clubs, everybody was extremely friendly and willing to mix - this led to a great atmosphere.
The standard of instruction was high too. I hadn't met any of the other instructors before (except my own) and I was impressed with how good and approachable they were. They took it in turns to lead different elements of the teaching, each teaching to their own strengths. It was also nice to receive instruction from some female instructors for a change - I haven't had that before!
Female instructors make good role models for female students, they show you what's possible for a woman to achieve. In fact one instructor was able to demonstrate that it is possible to do karate when you are 9 months pregnant! Though I did keep thinking we should have hot towels on standby - just in case. Her mother (another instructor) put us all to shame with the degree of flexibility she had - it's reassuring to know that that level of flexibility is still achievable as you mature through your middle years. To be honest if I'd had half that amount of flexibility when I was 20 I would have thought I was doing well!
Overall I thought the course was a great success. We all worked consistently hard for 3 hours, were pushed to our limits, had fun, got to know each other and came home thoroughly exhausted.
And the icing on the cake? That staple of British fast food on the way home....fish, chips and mushy peas, mmmm........

This work is licensed under a Creative Commons Attribution-Noncommercial-Share Alike 2.0 UK: England & Wales License.
Posted by Sue C at 15:39

Sounds like a good time was had by all! I love seminars like this - and have one coming up in a few weeks. Called "Afternoon With the Masters" it will be five very different seminars with five different karate seniors. I was excited about it before, but after reading your post, I'm REALLY excited :-)

I love seminars. One of my great disappointments is that my familial obligations right now really limit the number I can get to. I'm hoping that as my eldest son progresses in karate, he'll start wanting to go to seminars - which then allows Mommy to go with him!

Felicia: 'Afternoon with the masters'- what a great title, hope it lives up to its name. Enjoy it.

Perpetual beginner: It's great when you can attend these things as a family - I went with my husband and eldest son (he's 15). Not everybody's idea of a great family day out but if you're into martial arts you can't beat it!