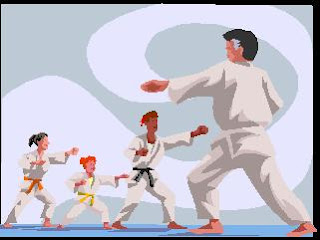 I helped out in the junior class last night. I didn't do a great deal of teaching but as I suspected I was mainly required to help with kata. For most of the class I just joined in.

One of the reasons for me being there is to partner any adult who would otherwise have to partner a child. However, last night there were four other adults (yellow and orange belts) so I wasn't needed as a partner. That gave me a chance to partner one of the young yellow belt girls and get to know her a bit better. It also meant I could give her a bit of one-one help with the pad work.
Later in the class I took a group of 3 yellow belts (one adult and two children) and taught them the beginning of pinan shodan. The first combination in this kata is quite tricky to learn for a beginner (which is generally why we teach pinan nidan before pinan shodan despite shodan being the first kata in the series). I found that tricky things to learn are also tricky things to teach!
I demonstrated it first facing the front of the class, but from behind they couldn't see what my hands were doing properly. So I demonstrated it facing them but I know that can be confusing because I'm then going in the opposite direction to them. What I really needed to do was face them but perform it as a mirror image so they could just copy - but that's easier said than done!
A few weeks ago Sensei had the senior class performing all the pinan katas as a mirror image. What a laugh! We were all over the place, it was really disorientating and confusing. After several attempts we were starting to do it but it was very difficult. If you've never tried doing a whole kata as a mirror image give it a go - it's a good exercise in coordination and concentration.
Anyway I did manage to teach my little group the beginning part of pinan shodan by demonstrating, watching them individually and correcting hand and arm positions.
The other problem I have is knowing what is an acceptable standard for a young child to perform at? Should a 7 year old yellow belt perform to the same level as a 12 year old yellow belt, or should you expect more from a 12 year old? Should all yellow belts, whether adult or child be performing to the same standard? Clearly one would expect a brown belt to perform pinan shodan with a greater degree of technical accuracy/timing/pace etc than a yellow belt - but how much more? How much technical inaccuracy is acceptable in a yellow belt? I don't really know the answers to these questions - presumably you get a feel for this with experience.
A young child has a shorter attention span, less ability to understand what is required of them and less developed balance and motor skills that an older child or adult so it seems unfair to continually correct every fault that you observe in their technique. Yet if technique is not corrected early bad habits can set in which can be harder to correct later.
Knowing what standard to expect for children of different ages and grading level is going to be a bit of a quandary for me for a while. If you have some insights into how to deal with this then I would be very grateful to receive them........

This work is licensed under a Creative Commons Attribution-Noncommercial-Share Alike 2.0 UK: England & Wales License.
Posted by Sue C at 15:32

you just have to layer things.

start with the first 3 moves of the kata get the direction and general understanding od what block / stance it should be etc.

adults now tend to want more detail before they progress to the next 3 moves whereas kids in my experience just want to know more...
this works as when the first 3 moves are looking right and meeting the criteria move on.
dont worry about age treat them all as individuals and let them do what they can manage.
its hard trying to remember to bend your legs for cat stance while thinking of the next new move and its transition.
kids learn directions and ideas first them concentrate on the details. too much emphasis on detail can leave the not as capable student behind.
everyone learn different.

mirroring is good but difficult as you need to swap between facing them and doing it with them. also move to the side where they can clearly see the next move.
get them to tell you the next move sequence - shodan block, kick,punch - this verbal clue helps them greatly ask them.

That's the answer - layering! That has immediately given me some ideas of how to teach kata to younger children - thank you for your insights!