What do you wear under your Hakama? 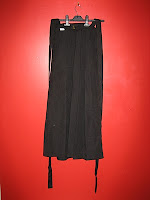 I have just received my new hakama! This is the first time I've ever owned such a garment. And what a strange garment it is. I need to wear the hakama in my kobudo class when training with the bokken. Up to now I have just trained in my gi but I will have to wear the hakama at my grading in December so I thought I'd better buy one so I can get used to it. A lot of people have told me it takes a lot of getting used to!

I tried it on and was quite perplexed by a few things: Firstly, how do you tie it? It has two lots of ties, one at the front and one at the back. Secondly, what do you wear underneath? That may sound a little like asking a Scotsman what he wears under his kilt, but honestly I have no idea. You have to wear something because there are large vents either side. I can't imagine wearing my gi pants underneath - surely that would be too bulky and too hot? Do I wear shorts, big bloomers or what? Thirdly, what is that little hard plate at the back for?

I managed to find an answer to my first problem, how do you tie it?, in this YouTube video:

Okay! Now I just need to practice all that.

I had a look around some forums to see if there was anything about what people wear underneath the hakama. Apparently, a lot of people wear their gi pants or cut-off gi pants. Some wear cycling shorts or ordinary shorts. Traditionally  a kimono is worn under the hakama but I think this is when it is being worn ceremonially.

According to Wikepedia the spoon shaped plate hanging at the back of the hakama is called the hera and slots into the obi, keeping the hakama in place.

Just out of interest the pleats of the hakama have a symbolic meaning: There are seven pleats, five at the front and two at the back, and they represent the seven virtues of Bushido: the five at the front represent- Jin (mercy), Gi (righteousness), Rei (etiquette), Chi (intelligence), and Shin (trust).  The back pleats represent the virtues of Makoto (loyalty) and Chu-kou (allegiance). The front pleats are also arranged asymmetrically, in keeping with Japanese aesthetics.

So now I know all about the hakama. However, I still want to know - What do you wear under your hakama? (Or gi)?

This work is licensed under a Creative Commons Attribution-Noncommercial-Share Alike 2.0 UK: England & Wales License.
Posted by Sue C at 17:03

The first post had some boo-boos, so I had to delete it. Sorry!

I've always liked hakama and thought the bow in front was beautiful, but the video that detailed how to tie it was about the most complicated thing I've ever seen! I can easily see it taking you a little longer now to get into your gear for kobudo classes (a LOT longer, actually). Yeah - good luck with that!

I don't wear hakama, but under my gi bottoms, I wear bike shorts. Not one for traditional drawstring pants, my elastic gi bottoms don't have slits, but most folks in my dojo who wears ones that do seems to have a problem with their undies showing for some reason. Tighty-whities and thongs are not what I want to spy when I'm sparing or doing drills with my uke. Cover that stuff up, people!

Anyway, my gi is black, so I can really wear any color underneath I want, but my bike shorts are usually black, too. They're comfy without being bulky, which is a huge plus...

Hi Sue. Often wondered how to do this properly. Thanks for enlightening me. The little "bow tie" at the end adds a nice finishing touch, and I now know why the belts are so long!

This seems to be a common problem with hakama! I remember when I bought my first hakama (admittedly a heavily modified version used in Oyata's Ryu Te) I was totally baffled on how to wear it! I had to go back to the seller and get a demostartion. HA!

Crikey! That looks a bit complicated! LOL. I've never worn one but I would thing cycling shorts would be most comfortable underneath, especially if you buy ones in a wicking fabric so you don't get to sweaty.

As for under my Gi - I'd never really given it much though before. I just wear my undies. Now I'm going to be worrying that everyone can see them! LOL.

Felicia - I agree it looks complicated - I expect I might find a few short cuts! Side vents on gi pants can be a problem - I think that's why ladies are supposed to wear the longer gi tops - for modesty!

Shibo Saru - It's definitely an unusual garment. Perhaps they should come with instructions!

Marie - I think you're right about the cycling shorts under the hakama - modesty without to much bulk. Under my gi I just wear my undies and a sleeveless vest or cropped top in case my gi top gets pulled apart!

Suddenly it all becomes so clear! I have always struggled with this. Thanks for posting it up. The Bow Tie thing is very cool.

Hi Tom, You're welcome, thanks for visiting my blog.