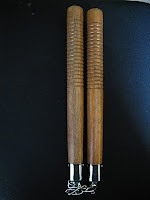 It must be the grading season or something because I've just graded for the third time in 4 months. This is one of the problems of training in two different clubs:- their grading schedules aren't aligned to each other, so you get no gradings for months and then three in quick succession. I did my first bo grading in June, followed by my 1st kyu grading in karate in July and on Sunday I did my nunchaku grading!

This nunchaku grading has sort of snuck up on me. Two weeks ago my instructor reminded me that I only had two more lessons before grading and then realised he hadn't taught me the manipulation kata! Suddenly the pressure was on, for both him and me.

I managed to learn the basic bones of the kata in one (intensive) session and practiced like mad at home. By the time the next lesson came I was able to do the kata in a passable way so we worked on improving some of my technique - I was holding the batons in the middle rather than towards the ends, I wasn't throwing my arm out straight or high enough with the strikes and I was a bit confused about some of the transitions between the different strikes. With these ironed out I was able to practice intensively at home again. I also managed to fit in an extra Tuesday lesson, so by the time of the grading my nunchaku kata was,well, okay.

The grading itself was short and sweet (about 10 mins) but had the usual array of problems. Some of the things I had prepared to show the grading officer did not necessarily coincide with the things he was expecting to see; not to mention me mis-hearing what he had asked for and showing him something else!

Things got off to a less than perfect start with the blocks. He asked for a rising block, I told my partner to kick me and did a downward block - doh!! "No, a rising block Susan". Sorry! I then got my partner to do a hammer fist strike and did the correct block. Inside and outside blocks were fine...on the right hand side. Nobody told me I had to do them left handed as well, at least not until the grading officer requested it. This proved extremely tricky! I managed to reverse the inside block in a passable manner but the outside block eluded me (but I think I managed to fudge it).

Moving on swiftly.....The grading officer then asked for a wrist lock and this went okay. The arm lock was next..."That's another wrist lock Susan, I want to see an arm lock". Well that was what I had practiced as an arm lock. I don't actually know any other arm lock techniques at the moment so I wasn't sure what to do next. "Just apply the cord further up the arm near the elbow and it will be fine," he said. So I did what he said and he seemed satisfied. Phew!

Next up was the wrist throw, followed by the head and hip throw. They went fine. Then it was two strangulation techniques. They went okay as well. Finally it was the manipulation kata.....would all the intensive training pay off? Or would my hand keep failing to catch the baton? Would I forget the sequence of strikes? I had just one chance to find out.......

I started off with single forward strikes (left and right), followed by foot return strikes, then overhand strikes where you catch it behind your back, followed by those strikes that you catch under your armpit, then underhand strikes caught at the front, finally double forward strikes followed by figure of eight strikes. Well, apart from fumbling once or twice to catch the baton I have to say it went okay!  His only comment was that I was a bit stiff and needed to sway a bit more with the batons.

The last item on my syllabus was to explain the history of the nunchaku. I had prepared my little speech about this but he didn't ask me. I have been told before that if the grading officer misses something out - don't remind him! So I didn't.

Finally we were all called back onto the mats to hear the results. Due to the slight problems in the early part of the grading I had mentally prepared myself to hear the words 'pass with credit'. But, what I did right must have been done pretty well because I heard him say 'Susan, nunchaku level one....pass with honours.' Wow!

This work is licensed under a Creative Commons Attribution-Noncommercial-Share Alike 2.0 UK: England & Wales License.
Posted by Sue C at 15:30

Congrats on your grading, Sue! Great job on passing with honors!

Thanks everyone. It's the sword next!

Bo...nuchucks...swords....remind me never to upset you missus! LOL.

Well done Sue. Never really tried nunchakus. How do you manage not to hit yourself?

Hi Matt, thank you. Unfortunately you do hit yourself a lot, that's why we train with foam nunchucks to start with. I'll probably move onto wooden ones once I'm training at level 2 (or maybe level 3)!

Hi Sandman, thank you. We do take a very applied approach to all our weapons training rather than just a kata based one. The downside to this is applied techniques are painful. My husband has been training with the tanbo and I'm his training partner - my arms and legs are black and blue! Funny he didn't have to train with a foam tanbo but I had to train with foam nunchucks, he's got no bruises at all, mmmmmm.......

Congratulations and well done, Sue! I always had problems with Nunchcku ,i envy people like you who can get it.

Hi Kenneth, thank you. Level 1 nunchucku is fairly basic but now I'm working on level 1 sword and that's a whole different ball game! My sensei doesn't know anyone that's achieved honours in level 1 sword so I'm really not expecting to be the first! Thanks for commenting.