Karate 'blocks' are much more than blocks 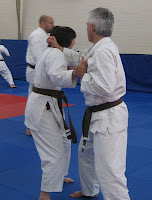 Blocks are often a very misunderstood technique in karate and often come in for a great deal of criticism from non-karateka. These techniques are often criticised for being to hard, stiff or slow to be effective. Your average non-karateka may say that it is better to evade, parry or re-direct an incoming strike than do a hard block. I would agree with them.
However, this is to misinterpret the many applications of the so called karate 'blocks'. To start with the word is misleading. The classic 'blocks' in karate belong to a family of techniques with the suffix uke. For example, age uke, uchi uke and soto uke. The word uke, as you know, actually means 'to receive', it doesn't mean 'block'. The other common technique often taught along with the uke techniques is gedan barai. The approximate English translation of this term is low level sweep and not even your average karateka would interpret this move as a useful 'block'. So none of these techniques should necessarily be thought of as blocks. Thinking of them as 'receiving techniques' or, as Iain Abernethy calls them, 'response techniques' opens up many more possibilities for their use.
So what are the applications of these 'blocks'? In my karate class on Wednesday we looked at several applications of 'blocks'. We focused mainly on gedan barai and uchi uke. With the gedan barai we used the sweeping arm movement to grab the opponents arm and pull them down and forward, completely unbalancing them. Keeping a grip on their wrist, this was followed through with a second gedan barai (with the other arm) in which you then used the sweeping motion to apply pressure above their elbow and push them down into an arm lock. This is actually bunkai out of the pinan nidan kata.
With the uchi uke, we applied this to defending against a single lapel grab: the opponent grabs your lapel, you trap their hand with yours (same side) and with the other arm perform a classic uchi uke move by bringing your arm across your body so that your forearm crashes onto the opponents outstretched arm that you've trapped, causing them to become unbalanced and bringing their head down slightly, then you pivot your arm up from the elbow (in classic uchi uke style), hitting them in the jaw with your fist on the way up. We also did something similar with a shuto uchi uke in which the first 'block' was used to strike the opponent's grabbing arm to unbalance them and the second 'block' used to strike into the neck (bunkai out of pinan shodan).
With all these techniques what started to emerge was a general principle : the first movement was used to unbalance the opponent and the second movement used to strike or lock them. This is what I like about karate, it is taught at the level of principles rather than just specific, unconnected techniques. When we are practising 'blocks' as part of kihon training, we are not learning a specific technique but we are learning a principle of movement that can be applied in many ways - as both offensive and defensive techniques.
So next time your instructor has you standing in rows, practising your 'blocks' time after time to his/her count, and scrutinises and criticises every little part of the movement until you get it right, remember he/she is trying to instill into you a pattern of movement that you will later be able to call upon in the application of a range of self-defence techniques. Nothing is wasted in karate, everything we do is connected to each other. Kihon and kata train us to move and control our bodies in particular ways based on sound principles of combat, which in turn feed into the specific techniques we learn in our self-defence training.
And remember......in karate, a 'block' is more, much more, than just a block.

This work is licensed under a Creative Commons Attribution-Noncommercial-Share Alike 2.0 UK: England & Wales License.
Posted by Sue C at 18:16

Very true, Sue! This is emphasized to us constantly in Issinryu. Every block is a potential strike, trapping motion, or a grab. I was sparring with a black-belt and he started off with a straight punch. I blocked it with a side-middle block, followed his forearm around, and popped him in the nose. Hahaha... It was ON, after that! I didn't land a single shot for the rest of the bout, but that first one was just perfect! LOL!

I had just been discussing the importance of trapping and how the concepts or principles of doing so could benefit artists from a variety of different styles.

Discovering the different applications of principles really opens up your understanding of your chosen art. Everything is connected and effective styles have very few wasted or unnecessary techniques. I really enjoyed your post.

Hi Frank, you obviously took him by surprise with the first one!

Hi Journeyman, thank you! Whenever I challenge something that I'm learning I usually come a cropper and end up revealing my ignorance. I have learnt to trust the people who come before me (sensei)and believe what they teach me. I have found exploring and examining what I don't understand a much more productive way forward.

the movement of the block, as you say, will be relevant to many other techniques. good post.

Hi JC, thank you and thanks for taking time to leave a comment.

My sensei once said that a block is not only a block but an intercepting barrier.

For example, if you do the upward overhead block properly you'd notice that it starts with a fist and goes upward as if throwing an uppercut then it redirects to the position where the front of the arm is over the head.

Apparently it's not meant to just absorb an attack but rather provide an offensive defence.

Mikazuki Okami, that's an interesting way of thinking about the upward rising block. The other week my sensei had us using the basic blocks to get out of wrist grabs - it worked really well! Blocks are very versatile things.