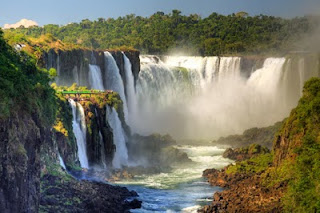 Last Autumn my karate instructor helped to found a new karate organisation called Seishin-do shukokai karate (SSK). Since then I haven’t really thought too much about what the word Seishin-do actually means. According to the SSK’s website it is defined as ‘The way of positive spirit’ but there is no explanation of what is meant by this. So, I’ve had a search round to see if I can find out a bit more:


It seems that ‘seishindo’ is a widely used term in martial arts and has several slightly different interpretations of its meaning. It seems a popular term to use in aikido circles where it is interpreted as the ‘Way of water’ or the ‘Way of the mountain stream’.


“Seishin conveys the image of pure, clear water running down a mountain. Seishindo Aikido implies that in our practice of Aikido we follow the movement of the mountain stream, The Water Way. In our joining with this stream, we come to know the nature of water and learn from it the art of Aikido.

It is the nature of water that it will assume the shape of whatever form it encounters while remaining forever formless in itself. Water is the epitome of non-resistance. In its coursing flow it will bend and adapt to whatever it encounters. Thus by following the natural order, water overcomes that which would oppose its natural flow. “

Several martial arts have incorporated the term seishin-do into their titles including seishindo kenpo, a comprehensive American martial art based on Chinese kenpo, grappling and empty hand techniques. It was developed by Frank Landers in the late 1970’s. The definition of seishindo used in this system is:


“(Seishin: 精神 せいしん mind; soul; heart; spirit; intention), (Do: 道 どう The Way) together translate into "Way of the Mind" which is the understanding of the conscious thought that goes into formulating an action as well as the subconscious understanding of how action can deceive us in battle. To achieve Seishindo you must find harmony between physical action, and compassion for those you face in battle. Physical fighting skill is only half of a student’s total development. Complete understanding of Concepts, Principles and Ideas of motion is the other half of a martial artist training. Without Seishindo, a student physical abilities, may become strong and powerful, but will always lack that completion needed to achieve harmony in their live.”

Another system calling itself simply Seishin-do, describes itself as a ‘modern system of self-defence’ where it encourages a ‘citizen’ mentality rather than a ‘combat’ mentality with the aim of developing “Peaceful, productive and self reliant individuals whose first responsibility is to survive.” This system defines seishindo as the ‘spiritual energy way’. They state that:


“Rather than over emphasizing the technical, as in most modern budo, Seishindo emphasizes the “spirit” of the technique, that is the doing of the technique. The“way” of Seishindo is not mystical or esoteric. It is simply recognizing aggression and reacting appropriately on an ongoing day to day basis. Spirit comes from a Latin word meaning to breathe implying oneneeds to be alive. Seishindo, the Spiritual Energy Way refers to the natural energy we all posses and that we can cultivate that energy by increasing our mental and physical acuity through martial arts training.”

So to summarise: Seishin-do can mean “The way of positive spirit”; “The way of water” or “The way of the mountain stream” to incorporate concepts of harmony and non-resistance; “The way of the mind” uniting the conscious and subconscious mind or “The spiritual energy way” referring to the ‘natural energy’ we all posses and can cultivate through martial arts training.

Each of these martial arts systems and their definitions of seishindo emphasise the mind-body-spirit connection encompassed in all budo arts. It seems to me that seishindo is about developing and mastering our minds and bodies, maximising our energy, and showing a positive but peaceful spirit in our pursuit of self-protection in order to lead healthy, safe and productive lives.

This work is licensed under a Creative Commons Attribution-Noncommercial-Share Alike 2.0 UK: England & Wales License.
Posted by Sue C at 18:02

Nice picture. How would you compare your style to other karate styles? Do you think you would be able to win an actual fight with what you learned?

Hi Anonymouos. I think it was Funakoshi who said 'there is only one style of karate!' I'd like to agree with him as I suspect the slight stylistic differences between the different branches of karate don't matter that much. What is probably more important is the quality of the instructor and the attitude and ability of the individual to learn.

Shukokai karate is known for its speed, hard hitting, slightly higher stances and attention to body mechanics. These characteristics often make a skilled shukokai practitioner pretty awesome to spar with and they often do well when pitted against a karateka of a different style.

As for me? Well, currently sparring is not my forte! I'm getting better at it but it is highly unlikely that I would win a sparring competition at the moment (or ever!). Competition sparring is a young persons game I think.

As for dealing with a street attack - well yes, I do think that I could put up a decent fight in defence of myself. I would want to keep it as short and sweet as possible, preferably avoiding the situation all together. But if I was forced to fight I hope I would make them regret attacking me!

Good answer, in the end difference in style will always be secondary to the quality of instruction and training and most of all to the fighting spirit of the practioner. As to competition or sparring: it's not the same as real fighting, not by a long shot. In competition or a friendly match you cannot hope to summon the same resolve and hostility towards the opponent since this would mean running the risk of hurting him severly and it's unnatural for most people to feel hatred for those that never hurt them. Sparring is good exercise but it's clearly not the real thing, it offers the possibility to test your skills in a relatively safe way yet your subconscious mind will always consider it a game and not a battle for survival. It's good that you have pride in your style and confidence in yourself. Being a martial artist is as much about mentality and becoming strong on the inside as it is on learning technique and training the body.

Best of luck with the new format!

Thanks Matt - it's going well so far!

sounds like a cool name and all the meanings seam to fit well into what is is your doing.

well thought out. i would imagine it would have been well researched before a group decided to use a name.

Hi Fishface, I think the name chosen for us was a good one - the SSK (seishin-do shukokai karate) association is about to celebrate it's first anniversay and is definitely going from strength to strength at the moment.