Black Belt testing will be tough! 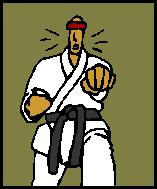 When I started karate I don’t think I realised just how physically demanding it can be! Since the New Year my instructor has been racking up the pace, pushing us harder and being generally more demanding.


There is a black belt grading coming up in May and we have several 1st kyu’s preparing for it. I am not in this cohort – I have over a year before I am ready for black belt. However, we are all included in these vigorous preparations!

The black belt grading is going to be tough. Of course, one would expect it to be tough – it wouldn’t be worth having if it wasn’t. Let me give you an idea of exactly how tough it will be:

There are 15 sections to be tested on. The first two sections alone involve demonstrating 6 punching combinations and 6 kicking combinations. Each combination will be demonstrated many times and you have to demonstrate correct technique as well as power and focus. This is exhausting! We have been doing this in class recently to build up our stamina and your arms and legs feel like lumps of lead by the end of it.

Sections 3 and 4 involve demonstrating longer, more complicated combinations, one of which is set on the day (so no prior practice). These will no doubt be repeated several times.

Sections 5 -7 are demonstrations of 3 kata along with 3 bunkai applications for each. Two of the kata are black belt katas and the third can be any previous kata the student has learnt.

Section 8 is gobon kumite, section 9 is demonstration of 8 different makiwara waza techniques (against a pad – not a makiwara post).

Sections 12 and 13 are drills – a ground fighting drill followed by a break falling drill.

Finally sections 14 and 15 are sparring – a few rounds of jiyu and shiai kumite!

That all sounds like a lot of hard work – and no allowances are made for age!

The classes recently have been exhausting but enjoyable. I’m not sure my fitness is yet at the level it needs to be to sustain a grading like this but I have over a year to prepare. It is very useful for us to get a taste of what black belt testing is all about – at least we know what we are aiming for.

What was your black belt grading like – was it really tough? Did you feel ready for it?

This work is licensed under a Creative Commons Attribution-Noncommercial-Share Alike 2.0 UK: England & Wales License.
Posted by Sue C at 16:24

I think the mental part of the black belt test is as tough as the physical/technical parts are. For us, it was designed to be cup-emptying; everyone has seen you "do your thing" when you are fresh or half-way through a class - but what can you give when your tank is empty? It was like they wanted you to show some spirit and gumption - that you could and would keep going until the fat lady sang and "Yame!" was finally called. Takes a lot of fortitude to be able to do that - which tells you that the mental and spiritual aspects of the art are tested just as much, IMHO.

We spend lots of time training the body in preparation for grading, but what about the mental/spiritual end of things? Some of that happens in the dojo, but much of it probably happens during "off-dojo" hours - when you're thinking about techniques, talking about it with training partners, blogging about it, even :-) You know like I do that there's much more to MA training than showing up for class, knowing some self-defense techniques and throwing a few punches and kiais. LOL...

Are you getting nervous about your own test yet?

When I tested for shodan, I spent countless hours in the dojo. In addition to class, my training partner and I worked out several hours a week for six months. Currently, we have a group of 1st kyu students in the dojo preparing for black belt testing. They are only starting to realize how much work and commitment is required.

I never feel completely prepared for testing. If I would have to pick...I was most prepared for my Shodan testing. My last test...I only had five weeks notice...it was different.

I just got tired reading about all of the sections!

It's going to be about 2 years (maybe less) before I test for black belt. I don't know from a first hand perspective what our test is like, but I have seen two people from our sister school test on two different occasions and the test lasted about 3-4 hours.

I really like how you talked about the 15 sections involved. We don't have...a standard like that. Each black belt test is individualized and meant to push the person to their own breaking point to see if they persevere.

I do know the bare minimum. All 9 forms, plus the black belt form, demo of all kicks, 4-minute 'teaching test' with a low kyu student, 1-step sparring, 8 self defense demo, free style self defense, sparring with about 3 kyu ranks, and at least 4 rounds with black belts.

And that's just the physical side. The mental side in my opinion is so much harder to prepare for. Not only must you demonstrate what you have learned, but you must explain what you're doing, why it's effective, and be able to defend your position under questioning. And from what I've seen, that's a major part of the test.

Felicia - I think you're right about black belt testing not just being about physical endurance but mental and spiritual endurance as well. I'm not nervous about it at the moment because it feels a long way off - I have to get through my 1st kyu grading first in July!

Michele - It all sounds very intimidating! I'm impressed by the commitment and dedication you showed to get your shodan.

Hi Crimson, sounds like your black belt testing will be tough as well! It's interesting to learn how different systems go about testing their students in different ways but all seem to have one thing in common - it's no picnic!

My first dan seemed like a rite of passage. It was physically demanding, mentally tough and (as in most Korean styles) had to break lots of building materials. But it was ok-there was a bunch of cho dan bo and we felt as if we were pulling in the same direction.

My second dan grading was quite different. I was quite alone. I was literally the only higher grade taking an exam and although I assisted in the lower grades when it came to my syllabus I was out there on my own. Which in some ways was more satisfactory. This was *my* grading and I owned it.

I'm not sure I performed better in my second dan grading but I felt more tired. I was older, sure, but I think it was more to do with the fact that I knew I was being scrutinised on an individual basis.

My third dan will be a real challenge. Sometime this year, I hear, and I'm now quite a bit older. Maybe wiser too though.

Hi Chris,
Seems like everybody has a tough time with dan gradings! We're not into the demolition business in my style :-) nor do we do any weapons (I go to another club for that) so at least the grading is just 'pure' karate.

..at least you'll have 'experience' on your side.

Honestly though I think everybody wants a tough grading. It need not be physically tough (although mine was) but it certainly needs to be demanding because I wanted to feel like I'd earned it!