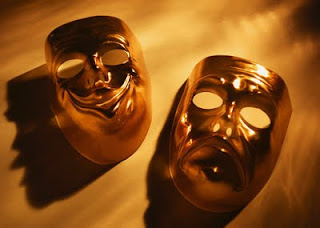 You can tell it's getting close to the holiday season by how many people turn up for training. Last night I turned up at 6pm to help out with the junior class as usual and apart from me and the instructor there was 1 student! He was a little 9 year old red belt, so I think it was a little bit intimidating for him with just two grown ups for company. So to make it seem less scary I just joined in next to him in the line so that he had someone to copy whilst the instructor talked him through things and corrected his stances/ hand positions etc. He coped really well with it and picked things up quickly, so all credit to him.
Actually it was probably doubly difficult for him since our usual instructor is on holiday (a month in New Zealand, the lucky thing) and one of our black belts, Bruce, is covering the sessions. Bruce has just started up his own club as well so he has a lot going on at the moment!
Interestingly the senior class had a good turnout (about 14) and with Bruce in charge it was always going to be a very energetic session! But what does it say about commitment when 1 out of about 16 turn up for the junior class and 14 out of about 16 turn up for the senior class? I know it is well documented that the peak times for giving up martial arts training are in the lower kyu grades (around orange/green belt) and then again at senior brown belt (just before black belt testing). Clearly all our brown belts are still very committed. Many have notably increased their commitment as they become 1st kyu grade and start preparing for black belt. The quality of their karate skill has increased significantly as they have upped their training - which just goes to show that achievement is proportional to effort.
Is our junior class typical of lower kyu grade behaviour? This is not the first time that the junior class has been depleted to just 1 student in recent months. During the October half-term I came in to help and there was just one student, the instructor and me. But the senior class was well attended as usual. The same pattern is seen in the long summer holidays as well - the junior class depletes whilst the senior class remains well attended.
I suppose I shouldn't be too surprised by this. I think the junior class acts as a filter. Most students will be lost through the filter's pores, only about a quarter to one-third will be retained and make it to the senior class. In fact, I think the student's in the junior class fall into one of four groups. 1. The karate-philes who love the art and are committed to training. 2. The karate-phobes who quickly discover it's not for them and drop out before grading. 3. The 'doing it for someone else' group, i.e. mums/dads who join in order to persuade their children to join and kids who join because their parents make them. 4.The 'keen but no time' group, who would love to continue but don't have the time.
I suspect the people who make it into the senior class are group 1 and some of group 3 who discover that they like it for themselves as well. I expect that groups 2,4 and most of group 3 are the ones that skip training every time there's a school holiday and the routine is broken.
Have you noticed a similar pattern of behaviour in your classes?

This work is licensed under a Creative Commons Attribution-Noncommercial-Share Alike 2.0 UK: England & Wales License.
Posted by Sue C at 14:08

It is hard to train when holidays are coming.

we have a very small class (5-6) and I'm the one missing out on classes. Otherwise, everyone is mostly there.

Hi Mathieu - thanks for calling by. I just read on your blog that you've just passed shodan so I'll let you off not training over the holidays! congratulations :-)