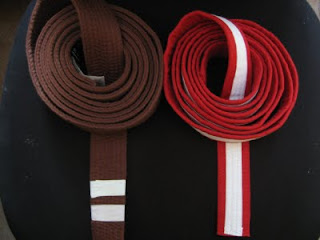 At last my stressful grading weekend is over! As I mentioned in a previous post I was grading for karate (2nd kyu) on Saturday and Kobudo (level 1 tonfa) on Sunday.

Karate grading: This turned into a long and tiring 5 hour marathon grading session. Not that we were grading literally for the whole 5 hours but there were so many of us grading at once, over 5 different grading levels, that it just took that long for all of us to get through our syllabus, bit by bit. The most difficult part of grading in this way was keeping warm in between being graded and maintaining concentration and enthusiasm for the grading. However, the positive thing about it was that there was plenty of time to practice the next element whilst standing at the back of the hall!
I managed to put in my usual level of performance - nothing went catastrophically wrong and nothing was exceptionally brilliant. I generally score between 66 and 70/100 which is respectable (pass mark is 55). This time I got 69, so no surprises! I was pleased with this score but for some strange reason I felt extremely flat and despondent after the grading. I don't know if this was just a reaction to the stress and tiredness of it all or what? but I couldn't shake off the feeling of negativity that I felt for the rest of the evening and much of Sunday as well. Not like me at all to be like that so I don't quite understand it.
Anyway by Sunday afternoon I had to put all thoughts of karate out of my mind and start focusing on my kobudo grading which started at 5pm:
Kobudo grading: There were lots of unknowns for me in this grading. I'd never been to the hall where the grading took part before. I'd never met the grading officer before and I didn't quite know how the grading would be run - so I was a little nervous! When we arrived we were told that the kobudo gradings would be done last after the jujitsu gradings. I looked around the hall to see at least 25 children and half a dozen adults preparing to grade in jujitsu and realised there was going to be lots of waiting around again! There were only 3 adults and 2 children taking kobudo gradings and I was the only one doing tonfa.
Finally I was called to grade along with my husband who was grading in level 1 Jo. We partnered each other. The grading officer first asked me to demonstrate a series of blocks which I had practised against a series of empty handed strikes. However, the grading officer wanted me to demonstrate them against a series of jo strikes. This foxed me a bit and I got a little confused about what was an inside/outside block against a jo strike! He saw my confusion, explained it to me and let me demonstrate them again. Not a good start then!
Next I was asked to demonstrate 4 locking techniques - these went well until one of the tonfa flew out of my hand, across the mat and landed at the grading officers feet! I'd never dropped the tonfa at that point in the technique before. I apologised to him and he handed the tonfa back.
The two enbos and separate hand techniques went well and defenses against bo and jo strikes were okay. Then I had to demonstrate defenses against 4 different attacks (front kick, side kick, roundhouse kick and back fist strike). These went well (apart from a slight error on one which I think I hid well) then he asked me to do some with a single tonfa. My face must have dropped when I said I hadn't learnt any single tonfa techniques for this part. He looked at me, smiled and said just do the same techniques but with one tonfa in your right hand. I thought ' in for a penny, in for a pound', just get on with it and see what happens! Anyway, it clearly went quite well - I seemed to impress him with my ability to adapt the techniques slightly on the spur of the moment - perhaps this grading wasn't going so badly after all?
I finished the grading by demonstrating my kata which I had to do twice, "bit faster this time...", what did he want, blood? Anyway, he called us to a bow at the end, looked at us and said, "You two do karate don't you?" I don't think this was intended as any kind of compliment! He pointed out that our stances gave us away as well as the fast, hard way we did the techniques. Apparently our stances need to be a bit more natural and our movements a bit softer and more flowing.
Everybody lined up for the presentation ceremony. I was called out first: "S.Wharton, tonfa level 1, pass with.....(despite cocking up the blocks, throwing a tonfa at the grading officer, not knowing any single hand techniques, doing the kata too slowly and committing the 'crime' of also being a karateka)... pass with HONOURS!
What can I say? My weekend ended on a high!

P.S My husband also passed is level 1 Jo with honours - well done! And his 2nd kyu karate with a mark of 74 (I'll catch ya next time).

This work is licensed under a Creative Commons Attribution-Noncommercial-Share Alike 2.0 UK: England & Wales License.
Posted by Sue C at 09:30

Well done you on passing both gradings! And brilliantly well done on your pass with honour.

Bet you're glad that's out the way now!

Whoo-Hoo! Congrats Sue! High-fiving the 'puter screen for ya...

Thanks girls! I'm definitely glad that's all out of the way. I can think about normal things now like family and christmas and ...life! :-)