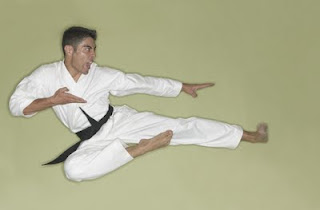 Sensei has been trying out some new approaches to teaching us recently. These are not things that we have never done before but we are doing them with much greater emphasis.

1. Kihon. We have always done kihon practice, particularly in the lower grades, but Sensei is now taking a slightly different approach to it. Previously, after going through all the basic block, strikes and kicks together we would then practice the different combinations commensurate with our grade. However, Sensei was finding it difficult to watch all of us at the same time and occasionally sloppy technique was slipping through the net unnoticed, which was then filtering its way into our performance of kata.
Now, we all do the same combinations regardless of grade (some relatively simple, others very difficult). After each technique in the combination we have to freeze and hold the position. Sensei then comes and looks at each of us and corrects errors in stance, arm height, hand position etc. We then move to the next technique and corrections are made again and so on until the combination is complete. If several of us are making the same error on a particular technique then the correct way of doing it is demonstrated and we practice it several times. Eventually we move onto doing the whole combination at full speed (hopefully incorporating the corrections made).
This approach is working well. Often you don't realise you are making a mistake until it is pointed out and it doesn't take long for bad habits to be established and they can be difficult to get rid of! Hopefully, new and better habits will be established and this will drive up the standard of kata performance. Well I think it's working on me! I didn't realise my age uke block wasn't quite right or that my hand position for a uraken zuki was wrong - now I know, I can do something about it.
2.Break falling. The first two years of my karate training we never (or hardly ever) did break falling practice. We didn't need to - we never did any throwing! Plus we always trained on a hard floor rather than mats. When we were practicing self-defense moves we would put in all the blocks, strikes, escapes and locks. We may even get into position as if to throw our opponents - then we'd stop. But karate does have throws in it doesn't it? Or at least it did. In many styles the throwing techniques seem to have been watered down or lost altogether.
So in order for us to practice some simple throwing techniques on each other we are now learning to fall safely. Most lessons now we get the mats out and practice throwing ourselves onto the ground! I actually find this quite confidence building. The reason I didn't follow my husband into jujitsu was because I didn't think I could cope with being thrown. I just presumed that it would hurt and be an unpleasant experience. But I've learned through karate that I'm tougher than I thought I was and if you fall properly it doesn't hurt at all. It can be a bit jarring occasionally and after a session of break falling I often have a stiff neck and shoulders the next day. In fact, between you and me, I actually quite enjoy being thrown now!
However, we are still a karate club and not a jujitsu club so most of the take downs we are practising are unbalancing techniques with pull downs or sweeps rather than the impressive throws you see in jujitsu or judo. I think we are all gaining in confidence since we started doing this break fall practice which comes through in the more assertive way we are doing ippon kumite and bunkai.

I love the fact that in karate you perfect techniques through constant repetition and yet despite a lot of repetition there are so many things to learn that it never gets boring! I can't wait for tonight's class ( I had to miss Monday's).

This work is licensed under a Creative Commons Attribution-Noncommercial-Share Alike 2.0 UK: England & Wales License.
Posted by Sue C at 10:45

Its always good to take on a sport and hobby which never gets boring makes it twice as fun and interesting! I'm Hua, the director of Wellsphere's HealthBlogger Network, a network of over 2,600 of the best health writers on the web (including doctors, nurses, healthy living professionals, and expert patients). I think your blog would be a great addition to the Network, and I'd like to invite you to learn more about it and apply to join at http://www.wellsphere.com/health-blogger. Once approved by our Chief Medical Officer, your posts will be republished on Wellsphere where they will be available to over 5 million monthly visitors who come to the site looking for health information and support. There’s no cost and no extra work for you! The HealthBlogger page (http://www.wellsphere.com/health-blogger) provides details about participation, but if you have any questions please feel free to email me at hua@wellsphere.com.