Escape the diet trap - some new ideas on weight loss... 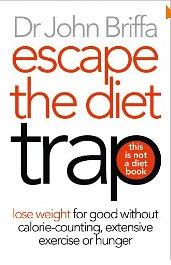 I read an article in The Times supplement last weekend that throws some conventional ideas about diet and fitness on their head!
The article was a promotion for a new book written by practising doctor and nutrition expert Dr John Briffa and included extracts from the book ‘Escape the diet trap’.
Basically he’s saying that conventional views on calorie counting, low fat foods, high carb intakes and aerobic exercise are bad for you if you want to lose weight and don’t work. Here are his reasons why:
·         Restricting calories leads to lowered metabolic rate – causing weight loss to stall at a higher level than ideal.
·         Restricting calories also leads to increased cortisol levels which pre-dispose to fat accumulation around the middle of the waist and can lead to insulin resistance.
·         Research shows that diets that are richer in fat and more restricted in carbohydrate than traditionally advised are better for weight loss and better at improving markers for type 2 diabetes and cardiovascular disease.
·         Low-fat diets have been proved to be ineffective for weight loss. Briffa explains that fat storage is not simply about calories but is under hormonal control, namely insulin. Insulin helps deposit fat into cells and keeps it there and eating a carbohydrate rich diet increases insulin levels – promoting the storage of fat. Paradoxically, diets rich in fat and relatively low in carbs actually lower insulin levels, allowing the body to give up its fat stores more easily.
·         Eating less saturated fat has not been associated with reduced heart disease but avoiding industrially produced, partially hydrogenated ones is.
·         Prolonged aerobic exercise such as running, rowing and cycling is associated with good health but not with weight loss. They do not burn calories quickly enough and make you hungry.
So what does John Briffa think we should be eating instead and what should we avoid?
·         Eat a diet relatively rich in protein – protein satiates appetite and reduces hunger.  Eat only fresh, unprocessed meat, fish (especially oily fish), seafood and eggs.
·         Eat only ‘natural’ fats, including saturated animal fats, olive oil, butter, avocado oil, coconut oil and full-fat yogurt.
·         Reduce carbohydrate intake, particularly those that contain added sugar and/or starch.
·         Avoid all processed and manufactured foods including soya based products and breakfast cereals. Also avoid beans, lentils and peas which are rich in potentially toxic substances called lectins.
·         Drink plenty of fluids. There is evidence that dehydration inhibits the uptake of glucose into cells, leaving blood sugar levels high and hindering the mobilisation of fats from cells.
What about exercise?
(Remember, this is to promote weight loss rather than get super fit)
Briffa suggests the best exercise to promote weight loss is High Intensity Intermittent exercise (HIIE). This is brief, intense exercise with periods of relative rest. Research has shown that there is improved insulin sensitivity, which would be expected to speed weight loss. HIIE also was found to stimulate the metabolism of fat and fat loss.
Example of an HIIE routine using either a cycling, running or rowing machine:
·         2 minute gentle warm up on the machine
·         10 second ‘sprint’ on machine at about 80-90% maximum intensity
·         Slow cycle, jog or row for 30 seconds
·         Repeat cycle or 6-10 sprints
·         2 minute cool down on machine
There are some interesting ideas here. I like the scientific rationale being put forward; it generally fits in with my basic understanding of biochemistry and metabolism. I may even download the Kindle version of the book…..
What do you think?

This work is licensed under a Creative Commons Attribution-Noncommercial-Share Alike 2.0 UK: England & Wales License.
Posted by Sue C at 13:29

Awesome Sue, thanks .... and if you can lose the weight overnite then it just might sell.

[cynical I am as Americans want it now and not over time for time it takes to do things right ;-]

Interesting book, thanks for the synopsis. I'd like to, however, draw aim at some of the claims the author makes as to why traditional diet advice doesn't work.

He says: reducing calories equals reducing metabolic rate.
Logic says: if a person is consuming hundreds more calories than necessary, than a reduction is a good idea

He says: Low fat diets are ineffective for weight loss due to hormonal factors. He blames carbohydrates for increased insulin levels.
Logic says: What kind of fat? What kind of carbs? When he says fat, I think of tasty bacon; but I suspect he is rather talking about 'healthy' fats like olive oil. And when it comes to carbs, it once again depends on what kind. The delicious coffee w/ 3 sugars in it that I am enjoying will probably spike my insulin some. But the apple I have packed for part of my lunch certainly will not. All carbs are not created equal and cannot be roped in together.

He says: Prolonged aerobic exercise isn't associated w/ weight loss.
Logic says: Here is where the man proves himself either insane, or a sensationalist. Increased activity + healthy eating choices = weight loss. I suspect that the research, if any was conducted, that supported this last claim were performed on people that are yo-yo dieters and/or are the kind that immediately reach for a snickers after a work out instead of an apple.

Brett, I totally understand your cynicism. Like I said Briffa's ideas turn conventional wisdom on its head but let's face it - conventional dieting doesn't work for many people. I can't really comment further until I've read the book which I think I will do....

Well, I'll tell you this much: it's nothing new. This material has been around a long, LONG time, reaching its peak with Atkins.

If you're really interested in the subject, the best book I've read is Good Calories, Bad Calories by Gary Taubes. I also keep a link in my sidebar to an article he wrote and a rather pithy blogpost by some Irish gent.

Man of the West, you're absolutely right. I've started reading Briffa's book (very compelling by the way) and he says that the research to support his views is not new at all, some of it has been around 60 years - it's just been ignored until now. I think the reason it's all coming to the fore again is because the science behind the findings is better understood now - it's all well explained in the book.

Oh, as to diet. I had an "episode" a few years back. I was informed that I needed to change, what I felt was healthy, diet.

I looked closer at my healthy diet and the food industry. I learned a good deal.

I removed all suger and stuck to fish, vegetables and fruit - locally grown and organic.

I changed nothing else and discovered that staying away from all "processed" foods and remaining with nature's intent did the trick.

It was the most difficult thing ever since I had become addicted to the food industries products.

I did this for three years before I slipped a little. I allow myself an occasional slip but mostly remain true.

I am healthier, etc. for it now. All the diet plans in the world mean no more, to me, than another madmen effort to make money when the answer is out there free for all who wish to partake.

Off the soap box now!

p.s. the word verification for this post was "punches" cool and funny huh?

Hi Charles, those processed foods are just 'slow death in a box', glad you managed to ditch them.

Reading this book has made me aware of how reliant I am on carbs in my diet - toast for breakfast, sandwiches for lunch, pasta,rice or potatoes with every main meal (and often more bread)! I tend to think that I don't have a sweet tooth because I don't eat cakes/biscuits/sweets or drink sugary drinks but of course I'm just getting my sugar via carbs instead.

Things are going to change - starting this week.....

Ultimately, though, I'm of the opinion that what we eat is way more important than how much. Eating the right foods at the right times will encourage our metabolisms and keep us healthy.

Addressing the calories issue brought up by "kyokushinblog.com" it's a little counterintuitive, but your body will go into a starvation mode if you restrict your calories unnecessarily.

While our bodies are VERY predictable, trying to apply simple logic doesn't always work. In other words, sometimes in order to lose weight you need to eat more. But, as I said before, it's not how much you eat, but WHAT you're eating that will make all the difference.

Hi Steve, it's definitely true that what we eat is more important than how much. Our bodies are not designed to process too much carbohydrate, it causes to many insulin spikes which can trigger hunger (because, as you rightly said) the body thinks it is in starvation mode!

All I can say to promote this way of eating is that the proof of the pudding is in the eating: I've been on the diet for nearly 3 weeks now and I've lost about 3 pounds (I don't actually need to lose any more)but the main benefits have been the elimination of all gastro-intestinal symptoms such as bloating, and I mean complete elimination throughout the whole day even after a big meal!

The other positive effect has been more energy throughout the day. Before I nearly always fell asleep in front of the TV (however compelling the film), I just couldn't help it. Since eating no carbs I haven't fell asleep once, not even yawned and I'm sleeping better at night too.

These positive effects tell me that carbs were doing me a lot of harm! My husband (forever a great cynic) agrees....