On Sunday I accompanied my training partner, Charlotte, to her Black Belt grading. We had to be at the venue by 10.00am so it was an early start. I was up at 6.00 and out of the house by 7.30. Fortunately the snow held off for us and we crossed the Penines without any problems, arriving early at 9.30.

Charlotte was nervous but composed on arrival. We changed into our gis and went into the main hall. This is such a great venue - a purpose built judo dojo with wall to wall matting! There were 5 candidates grading - 3 teenage girls from our club grading for 1st dan and a teenage boy and man from other clubs grading for 2nd dan. 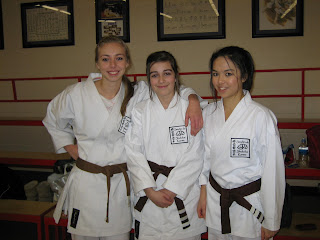 Charlotte, Alex and Caroline looking relaxed before the grading commenced!
Our girls were all a bit nervous - it is a big occasion for such young people, and so I did feel a bit like 'Mother Hen' looking after her chicks! I just wanted to keep them calm and focused so we had a jog around the hall to warm up and did some stretching.

The senior grading officer then called us to the grading mats and explained how the grading would progress and what the expected etiquette was for entering and leaving the grading area. There were 15 sections to be graded on with short breaks between each section to practice or get a drink/snack.

The first hour was devoted to practising the kihon sections under an instructors guidance. This was designed to get the adrenaline pumping and get rid of any nerves before the grading started. I, and the other non-grading partners were then asked to leave the hall and wait in the corridor until we were needed for the partner work. In our system no one is allowed to observe the dan gradings unless they are directly involved. The candidates then worked through all their kihon again, this time being graded. By the time I was allowed back into the hall the candidates were all looking pretty hot and exhausted!

Once all the kihon is out of the way (first 4 sections), a partner is required for the rest of the sections. We then moved onto kata and bunkai - 3 kata with 3 bunkai demonstrations for each. Now I was feeling a little nervous! Charlotte and I practiced the bunkai demonstrations at the back and then we were called onto the grading mats. I thought Charlotte performed her kata very well - she put in the timing and breathing, she

remembered to look, prep, turn, and her technique was strong and sharp. In my humble opinion they were good performances.

As the grading continued more and more pressure was put on the girls, 'Do it stronger', ' look like you mean it', 'let's see that again', were common comments from the grading panel. As they became more physically exhausted the stress was starting to show. Half way through we started to get a few tears, a few doubts and few negative thoughts creeping in. It was time to get into mother hen mode and start encouraging and motivating the girls again! To their credit they held it together, re-composed themselves ready for each coming section and then gave it their best shot.

It was a tough grading, fair but tough. The girls were taken to the brink of physical and mental exhaustion - it was an emotional roller coast ride for them. They felt sick and ill with exhaustion but they carried on. They felt tearful with the stress of it but they composed themselves and carried on. They are young girls, still growing, still gaining strength and stamina. They put on a good performance, they couldn't have given more.

At the end of the grading everyone was asked to leave the hall whilst the panel discussed the marks. This was a tense time, the girls were relieved it was over but still tearful and fearful about the result. Their parents had arrived by this time and so we all tried to lighten the atmosphere a bit and get the girls ready to hear the results.

We were all allowed into the hall when the results were announced. The girls lined up with the two guys and were called in turn to hear their mark. Alex - passed, Caroline - passed, Charlotte - passed. (The two guys passed their 2nd dan as well). It was such a great moment. They had passed with respectable marks as well. We all clapped and cheered as they were each presented with their certificates and black belts. 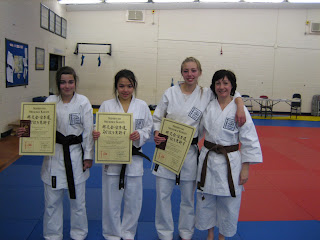 From left to right: Alex, Caroline, Charlotte and me!
I think the girls could hardly believe it - they were pretty shell shocked by this stage so I think it may take a while for their success to sink in!

But girls, if you are reading this - this is black belt, this is the beginning not the end. You were not expected to be perfect, you were expected to show strength, spirit and stamina, and despite the stress and tears you did that in bucket loads. If it had been easy it would not be worth having. You had a tough ride and you survived! WEAR YOUR BLACK BELTS WITH PRIDE - YOU DESERVE THEM.

This work is licensed under a Creative Commons Attribution-Noncommercial-Share Alike 2.0 UK: England & Wales License.
Posted by Sue C at 17:16

That's great! Well done to all your grading candidates! :-)

Well done to all the girls! It's nice to see some teenagers with some spirit and commitment! Alas, I fear they're few and far between these days. I look at some of the teenage students in our classes and wonder why they're even there sometimes.

Well done to you too - clearly you made good on your grading partner role. Won't be long till it's your turn!!

Hi Marie, We have a few teenagers like that too but these girls really rose to the occassion - I'm proud of them. It will probably be my turn next May/June time - at least I'll know what to expect!

Hi, SueC: Congratulations to your dojo mates on their recent promotion.

A saying for Sho-dan: "You have earned your wings, welcome to the sky!"

Welcome to all your dojo mates to that huge, blue, sky we call the "Way!"

"In our system no one is allowed to observe the dan gradings unless they are directly involved." - shame, perfect opportunity to learn for all grades regardless.

"'Do it stronger', ' look like you mean it'," - what I would like to know is this, have the Sensei every fully explained what they mean when they say these two phrases?

Have they explained why those not testing can't watch? Is it to keep the black belt grading contents a surprise? To ensure that people don't distract those taking the test?

At my dojo, people are allowed to watch, but there are a few issues with parents talking too loud, etc. sometimes.

Congratulations to all those who passed!

Felicia, thanks - the girls did great - I have the bruises to show for it!

Charles, thank you and yes I think the girls knew what was being required of them - doing techniques strongly and showing intent are things we discuss in the dojo. They were given every opportunity to show what they could do. I think it was a tough but fair test.

Charles and Etali, I realise that the 'secrecy' of our black belt testing comes as a bit of a surprise to some but I think the main reason is to remove all sources of distraction for the testing candidates. For all our kyu gradings parents can stay and watch, just not for the dan gradings. However there are no surprises during the grading - only the syllabus is tested on and nothing else and all the students will have been working on this for months. The only exception is that one combination is set on the day but the candidates have time to practice this at the back of the hall first. My overall impression of the grading is that it is very similiar in the way it is conducted to the higher kyu gradings except there are 15 sections instead of 10. The best way to get a sneak preview of the dan grading is to do what I did and offer yourself as a partner for someone that is grading - helping others helps you to help yourself!

A big congratulations to the girls!

Our dan gradings are also not open to view and over the history of the dojo, many different things have taken place. The curriculum and syllabus are always trained, but tests have involved a variety of different aspects. The grapevine only talks about so much, but some first dan gradings have even been unexpectedly re-scheduled at the last minute to start at 2 am in the morning. Some have lasted over 8 hours. The founder of our style likes to test us at our best and at our worst.

Some will disagree with this approach, but no black belts in our style has complained.

As an aside, thanks for the comments on my principles vs. specific techniques post. I enjoyed your blog post on the flinch response. Lots of interesting thoughts and information.

Journeyman, 2am! That would definitely see me at my worst.LOL. But there is something to be said for expecting the unexpected. When my husband did his black belt in jujitsu he was given 2 ukes he'd never seen before (both senior dan grades) and expected to just get on with it - he found that quite tough but he survived and passed.

What a great thing you did Sue, to help Charlotte and the other girls through their tests. The calm, stabilizing influence of an older lady during this nerve wracking time can be a real life safer.

I 'll never forget my cornerman talking me through the tough rounds, and I can still hear the crowd cheering me on. Such great support in your dojo. Well done girls.

Hi Matt, I think the girls appreciated having someone there to give a bit of support and encouragement, it was quite an event for them. In fact we haven't seen any of them back in the dojo yet so they must still be recovering! I think the very bad weather we've had recently might explain their absence as well.

Of course you are a young pup in comparison to me, Sue. Older than the girls is what I meant. Am I in the doghouse or what? Better not dig myself in deeper.....

is it basically learning how to accurately kick a guy in the testicles with enough force that he is helpless with agony?