We visited the Royal Armouries in Leeds last week. This is such a fantastic museum, how on earth they manage to keep admission free when they have such high quality, valuable exhibits and put on several 'shows' a day, I do not know!

Over Easter they had a medieval theme with lots of armour, sword fighting demonstrations and jousting. Though we didn't get to see the live jousting event, we did go to an interesting slide seminar about jousting and medieval armour. Did you know that though a full suit of armour weighed about 70lb, its design, with the weight distributed over the whole body from the shoulders meant that it was relatively easy to wear and a Knight could easily jump onto his horse without assistance. Also, medieval knights had very undeveloped calf muscles (because they rode everywhere and rarely walked anywhere) so the suits of armour in the museum today do not fit a modern man on the leg - they were designed to fit a very flat calf muscle! You can see this on this first picture: 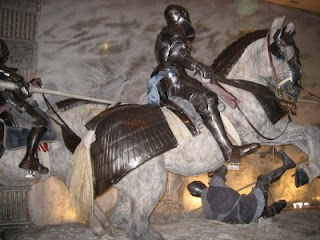 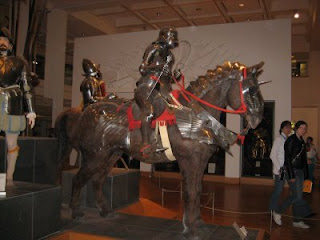 About three years ago they had a Japanese exhibition celebrating the 300 year anniversary of the death of Ieyasu Tokugawa Shogun (the last shogun). In that exhibition they had loads of Samurai exhibits. As that was a visiting exhibition I didn't really expect there to be a lot of Japanese stuff there this time, so I was pleasantly surprised to find there was a fairly substantial permanent Oriental exhibition. The suits of Samurai armour were absolutely fantastic, such craftsmanship and attention to detail - pity to go off fighting in them really. 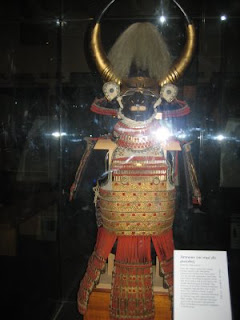 I particularly liked the horse armour - especially the mask: 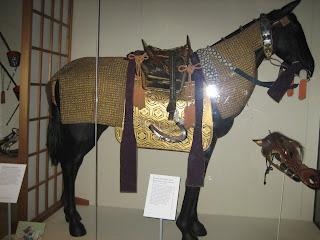 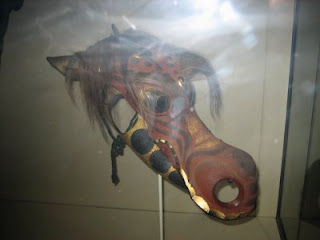 There was also an impressive range of Japanese archery equipment: 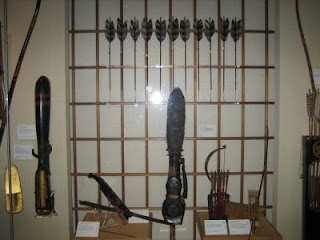 If you ever get the chance to visit the Leeds Royal Armouries I would recommend you go along. They have a Wild West Weekend coming up in May.

This work is licensed under a Creative Commons Attribution-Noncommercial-Share Alike 2.0 UK: England & Wales License.
Posted by Sue C at 14:18

Sounds like a great museum. Thanks for posting about the Royal Armouries.