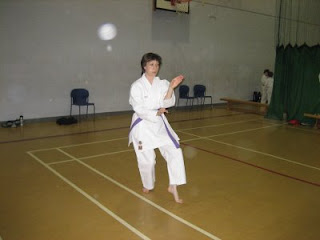 Just a quick post to let you know how the competition went. Hubby and I were in the final category of the day so we had about a 3 hour wait before we competed, but this gave us plenty of time to practice! The sports hall was divided into two by a curtain and one side was the competition area and other side was a practice area. This worked extremely well as it meant that the people actually competing had no distractions from people walking around or sitting and talking - something that happens at the bigger competitions!
There were 11 people in our category, 3 black belts, 5 brown belts and 3 purple belts. There were 4 rounds: 11 to 8 to 5 to 3. We were allowed to do the same kata for each round if we wanted or we could do different ones. I chose to do Annunko in each round I was in.
It's quite nerve wracking having 4 judges watching you from all angles plus the rest of the competitors watching you as well. But I managed to do my kata without any mistakes which I was pleased about as I was making lots of mistakes during the practices! Clearly I focus much better under pressure.
So, how did I do? Well I was very proud to come 4th out of 11 - especially as I helped to knock out 2 black belts and 4 brown belts. I just missed out on getting a trophy, but my husband came 3rd so we still brought some silver home with us. Two of our teenage members took 1st and 2nd places ( black belt and brown belt respectively) which they deserved.
Sensei organised the competition brilliantly - it was the first one he has organised and so my congratulations go to him, everything ran like clockwork. There was a professional photographer at the event who will be uploading the photos onto his website. When I have been notified that they are ready I will put a link on my side bar so that you can view us in action in you want to.
The picture at the top of this post is me practising.

Email ThisBlogThis!Share to TwitterShare to FacebookShare to Pinterest
Labels: competition

Congratulations to you and your husband and to everyone else who took part.

I know hoe demanding and stressful competitions can be and I know it's a common saying but it truly is the taking part that counts.

I found it interesting that you had to demonstrate kata in multiple rounds. In our local tournaments, you perform the kata one time.

I will check back to see your photos.

Michele, thanks. I've only done one comp where I only had to do one round and that's only because there were so few of us! Most comps here have multiple rounds and usually you have to demonstrate a different kata for each (or alternate between 2 kata). Sensei was just being kind to us letting us repeat the same one.

Woohoo! Sounds like your are satisfied with your accomplishment. Good for you. Stay hungry!

Great pic of yourself! Look at the concentration!